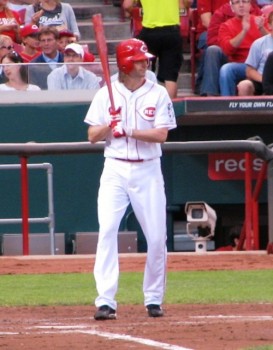 Bronson Arroyo and his red bat move towards the batter’s box.

Last Game
The Reds can actually win occasionally! They improved their record to 7-14-2 last night by beating the Rockies 4-3. Bronson Arroyo started for the Reds, giving up 1 run (earned) on 5 hits and 2 walks through 5.2 innings. The RBI belong to Devin Lohman, Donald Lutz, some guy called Jay Bruce who hit a solo shot in the sixth, and Arroyo himself.

Next Game
The White Sox come visit the Reds today at 4:05 p.m., so keep a lookout for Adam Dunn. Homer Bailey is starting for the Reds.

When the fifth rotation spot is the most interesting thing to talk about
It’s been a slow spring training. A team where most of the positions are already set is a team lacking the drama of guys breaking their backs to prove themselves. It’s a double-whammy of boringness: little roster drama and a team too busy perfecting their game to win.

Good problem to have, right? Yeah, I guess. No, it is.

The one position that isn’t decided is that fifth rotation spot. Will it be Mike Leake, the guy who has proven he can throw strikes and who could be better than a fifth starter on most every team out there? Or Aroldis Chapman, who is more of a question mark but could be the next Randy Johnson?

Fortunately for those of us who try to write something about this team most every day, the debate continues. Apparently the front office types met just yesterday afternoon and still aren’t announcing a decision. Since it’s about the only one they’ve got to make, I guess they can afford to wait.

What to Say to Sound Smart at the Water Cooler
It’s Puerto Rico and the Dominican Republic in the World Baseball Classic finals. Puerto Rico had to beat 2-time WBC Champion Japan to get to this point. The game is at 8 p.m. tonight at AT&T Park in San Francisco.

Posted in Daily Briefs.
Comments Off on In brief: Leake/Chapman question still unanswered