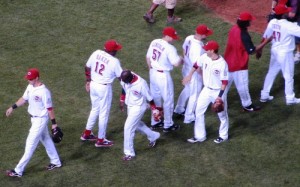 Last game
The Reds won big time yesterday, 11-1 over the Cubs. Johnny Cueto’s last spring training start was a beauty, including 6 shut-out innings and a 1-for-1 night with a run scored. It was a regular looking score until the Reds unleashed nine runs in the ninth inning. You can read more details in the game wrap.

Next game
The Reds host the Padres today in Goodyear. Mike Leake will be making his last spring training start for the Reds at 4:05 p.m. On the other side of the scorecard, Edison Volquez will be starting for the Padres.

There are no outs
Jorge L. Ortiz had a very interesting piece in USA Today yesterday about the dearth of openly gay athletes–baseball players specifically. It even quotes Dusty Baker:

When he joined the Dodgers in 1976, Cincinnati Reds manager Dusty Baker played with Glenn Burke, who along with ex-outfielder Billy Bean are the two former major leaguers known to have publicly come out after their playing days.

Baker says Burke, who died of AIDS in 1995, was “like my little brother,” yet he didn’t know Burke was gay until a mutual friend who is a lesbian pointed it out.

Much like Burke kept his sexuality a secret, Baker figures gay players are doing the same now.

“I don’t think the world is at that stage (of accepting them),” Baker said. “It’s not baseball. It’s the world.”

Baker’s opinion matches the rest of the article. While individual players and teams are already saying they’ll be supportive when someone does come out, it’s the world at-large (specifically the media) that’s going to make life so difficult for that first guy.

Increasingly, high schoolers are coming out and living the entirety of their lives free from the sense that there’s something weird about them. It is inevitable that within a few generations of draft picks there’s going to be a few guys who don’t even need to come out because they always will have been.

It will eventually be as much of a non-issue as all those other characteristics that don’t directly correlate to playing ability–race, religion, national origin. That’s how it has always gone, and that’s how it will go with sexual orientation.

That being the case, if a guy is going to be the brave one, the one to make his mark on history as the first, his window of opportunity is rapidly closing.

What to say to sound smart at the water cooler
There are just 5 days left until Opening Day.

Posted in Daily Briefs.
Comments Off on In brief: on openly gay baseball players