In brief: a taste of winning yet to come 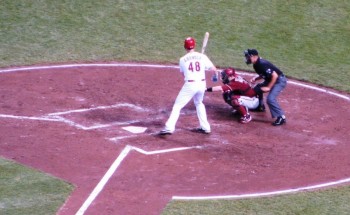 Last game
The Reds were winners again yesterday, taking down the Padres 3-7. Mike Leake did the starting for the team and had a good outing: 1 run on 5 hits in 6.0 innings.

Ryan Ludwick came through big time with a 3-run homer in the seventh inning to break the 1-1 tie and give the Reds a lead they wouldn’t lose. Joey Votto also his a home run to provide some padding and something us to talk about.

Next game
Today the Reds host the Royals at 4:05 p.m. Mat Latos will be taking his turn at last-chance-to-rock-spring training.

Please welcome our guest posters
The Red Hot Family is taking a vacation! We’re heading to that traditional spring break destination of London, England. Damn the luck that spring break is falling on the week of Opening Day and Opening Night, which has been our favorite tradition for the last 2 years.

I don’t even know if they get ESPN across the pond, let alone Fox Sports Ohio, so we’ve bribed a couple guest bloggers with the promise of scones to take over while we’re gone. They’re both far more knowledgeable and emphatic about sports than I am, so I expect to see some real high quality content here for the next week for a change.

But don’t worry! We’ll be back to writing the same goofy crap you’ve grown accustomed to before you know it.

What to say to sound smart at the water cooler
The Reds have 2 more pitchers to cut before opening day. Which is just 4 days away.

Posted in Daily Briefs.
Comments Off on In brief: a taste of winning yet to come