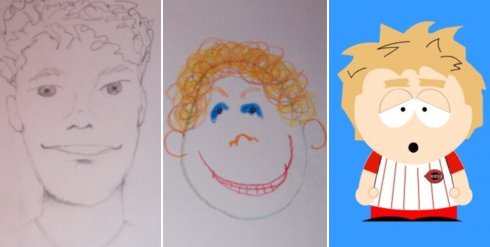 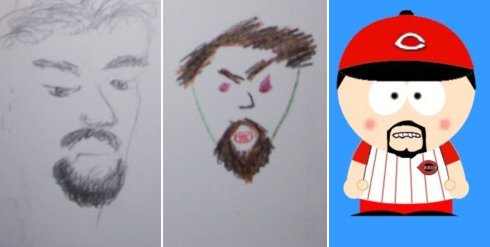 Anthony Castrovince, writer for mlb.com, posted an interview with the Mr. Javier Valentín and didn't even ask him how it felt to be known far and wide as The Latin Love Machine.

But we know all about his first car. Woo. Seriously, these interviews are like the Seven Stupid Questions, only without the benefit of rhyming words. Fortunately, Javy volunteered some actually interesting information. I guess it's worth a read.

In news unrelated to my intense jealousy, fake news tonight! You're going to love it! Well, maybe you won't love it, but I'm going to laugh my ass off. Plus, one more big RHM announcement this evening. Stay tuned.

Posted in Random Ramblings.
Comments Off on Where’s The Love?

The Reds Have New Owners

Or pretty close to it anyway. The following press release appears on the official site:

CINCINNATI -- The Cincinnati Reds, LLC, the entity which owns the Cincinnati Reds Major League Baseball franchise, today announced that its owners intend to sell a controlling interest in the Club to a group of Cincinnatians led by Robert H. Castellini, Chairman and Chief Executive Officer of Castellini Company. Other members of the purchasing group include Thomas L. Williams and William J. Williams, Jr., President and Chairman, respectively, of Cincinnati-based North American Properties. The purchase price of the interests sold will be based on an enterprise value for the Club of approximately $270 million. Upon consummation of the transaction, it is expected that Mr. Castellini will become the CEO of the Reds.

Several of the existing owners, including Reds' Chief Executive Officer Carl H. Lindner, George L. Strike, and William J. Reik, Jr., intend to retain an interest in the Club. The owners of the Club who intend to sell all their current interests are Great American Insurance Company and a subsidiary of Gannett Co., Inc.

Mr. Castellini stated that, “Carl has meant so much to the Reds and the City of Cincinnati. As such, we are thrilled that he has agreed to continue his association with the Club as a significant partner in our ownership group. I look forward to finalizing the agreement and submitting our group for MLB approval in the very near future as we are very excited about this opportunity and are eager to get started on the work ahead.”

Messrs. Castellini and Williams are familiar with the Reds' tradition and the Cincinnati market, and bring unique experience to the Reds from their many years as part owners of the St. Louis Cardinals. In addition, the Williams brothers' father and uncle were major owners of the Reds from 1966 until 1984.

In February 2005, current owners Nippert, Strike and Gannett began the sale process by engaging Allen & Company LLC, a New York based investment banking firm, to offer for sale that group's interest in the Reds. “In selecting the Castellini group, the commitment of Bob Castellini and Tom and Joe Williams to our community was a very important factor to all of us,” explained Mr. Strike.

The Reds are the oldest professional baseball team in America, dating back to 1869, and were a charter member of the National League at its formation in 1876. During the Club's storied history, the Reds have appeared in the World Series nine times, winning five times. On three other occasions, the Reds reached the National League Championship Series, most recently in 1995.

While a definitive agreement has not yet been signed and any sale is subject to regulatory review and the approval of Major League Baseball, the parties expect to complete the transaction before the end of the year. Until such time as the necessary approvals are received, the purchasing group will be precluded from making further comment on the proposed transaction.

Posted in Random Ramblings.
Comments Off on The Reds Have New Owners