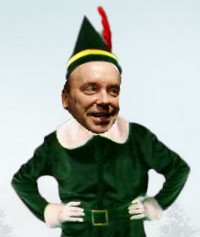 We here at Red Hot Mama were lucky enough to intercept one of Wayne “Kriv-dawg” Krivsky's electronic Christmas cards.

Not really, of course, but definitely click. This will totally make your day.

The Reds have traded Brad Key and Javon Moran to the Phillies for right-handed first baseman/outfielder Jeff Conine.

Check out a bunch of quotes on the deal at Marc's blog from Wayne Krivsky, Jerry Narron, and Jeff Conine.

Krivsky says something that I might not agree with but at least can actually understand:

“Continuing to look for that quality right-handed hitter, whether it was by trade route or free agency, we just felt like this was our best alternative. Iâ€™ve had him on a list of players that might be acquired by trade to fill that role that weâ€™ve been looking for. We just felt like after talking to all our scouts, this was the best alternative that was available to us.”

Obviously Iâ€™ve played a lot with Alex Gonzalez â€“ we won a World Series together and heâ€™s probably the best shortstop Iâ€™ve ever played with. Iâ€™m looking forward to watching him in action again.”

Add to that the fact that his musical preferences should jibe well with Bronson Arroyo's (Conine performed Stone Temple Pilot's Plush on Oh Say Can You Sing?), and we might just have a positive vibe going on there.

Brendan Harris was designated for assignment to make room on the 40-man roster.

Posted in Wheeling and Dealing.
27 Comments