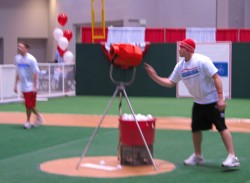 Among the many features of Redsfest 2006 was the indoor wiffleball field, where real-live grown-ups played real-live wiffleball on a real-live indoor/outdoor carpet.

I didn't watch much of the wiffleball tournament, but when I caught glimpses, I noticed a striking difference in skill. One team seemed to just keep batting around, another seemed like they just couldn't get the hang of a hollow plastic bat and ball with holes in it.

I'm not sure which would be more embarrassing. 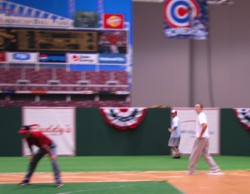 The best part is that, after the tournament was complete, the program actually showed general access to the wiffleball diamond for even us non-homemade-team-shirt-wearing plebeians.

Thankfully for everyone involved, the wiffleball diamond featured a device you probably didn't know existed, and will soon discover you cannot live without: a wiffleball pitching machine. Just think of it: gone are the days of lobbing a wiffleball 15 feet in the air to make the vertical distance of eight feet between you and the batter, only to have the wind pick it up halfway there and send it into the neighbor's yard! Finally, a wiffleball moving in a more-or-less straight line! 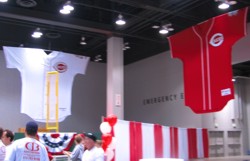 What will they think of next??

Hanging high above the wiffleball diamond were enormous jerseys to demonstrate the new team look if Ray King were on the team. The CTS took these photos well before the fashion show, so if I'd been on my game, we could have been showing off the new threads a whole hour earlier than we did. 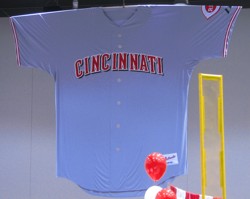 But it's probably better that we didn't. There's got to be some privilege for the people who skip work to go to Redsfest.

As we all know, the Reds recently signed Alex Gonzalez to a free agent deal, reportedly $14 million for three years. The move essentially means Gonzalez replaces Felipe Lopez as the Reds' regular shortstop.

This deal has been slammed pretty hard in some circles. The people who are upset with this, though, all seem to think guys like Barry Larkin, or for that matter Alex Rodriguez, grow on trees.

I look at it this way: For a little less than $5 million a year, the Reds have a guy who committed just 7 errors in 111 games at short last year. That's important when you play in a launching pad like GABP, where every guy who reaches base because of a Cinci error could end up being an extra run scored by the other team when a ball that would have been caught for an out in another city flies into the seats at GABP.

The Reds not only got the youngest free agent shortstop on the market (Gonzo is 29), they got a guy who fills a real need at the most important defensive position on the team with the possible exception of catcher. One of the Red Sox bloggers wrote that “Gonzalez was the best defensive shortstop I've ever seen play in a Red Sox uniform and it was a treat to see him play everyday. At least once a game he'd do something that seemed impossible.” Consider that in light of the fact that in recent years the BoSox have run Nomar Garciaparra, Pokey Reese, and Orlando Cabrera out there.

Another Boston blogger wrote, “You can quote all the defensive statistics you want to. The truth is, I watched every game this guy played last year and he is by far the best in baseball at shortstop…if the ball was anywhere to the left side of the infield it was an out…the DPs you will see him make will make you forget the contract.”

Oh, yeah, the contract: Look at what teams are signing players for this year. $5 Million this year is $3 million last year. If Gonzalez is even among the top five defensive shortstops in the game, that's a bargain in GABP where you try to get pitchers to induce grounders, and need to have guys who can actually catch those grounders to make the pitchers more effective. For the Red Sox, maybe his glove didn't offset his poor hitting, but this isn't Boston, it's Cinci. Shortstop isn't as much of an offensive-minded position in the NL as it is in the AL. He's certain to be an improvement over Lopez and Clayton.

So, my take on the deal is that this makes two pretty good additions to the Reds that Krivsky's stolen from the Red Sox. He better cut that out, or Theo's not going to send him a Christmas card.

Wow, Redsfest was a great time, and now, a little sore of feet, we're heading home. I've got about 200 photos to go through and at least two more audio files to share, so we'll be working on that in the coming days.

Stay tuned, and think happy thoughts about good traffic for us.