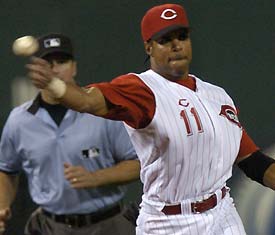 In all honesty, I think we all would have been kind of surprised if Barry Larkin had been voted into the Hall of Fame in his first year of eligibility. Would have been nice to have been surprised.

Even so, Larkin was no slouch. He pulled in 51.6% of the ballots, nowhere close to the 75% that he needed, but an indication of great things to come. From the MLB.com story:

Larkin’s chances for the Hall look even better compared to other great shortstops who have been snubbed by voters. His contemporary, former Tigers shortstop Alan Trammell, received only 22.7 percent of the vote on his seventh attempt.

The one guy who was elected in, Andre Dawson, had a similar percentage his first year on the ballot, and he lingered around 50% of the vote for four years. Then, he spent two years around 65% till finally pulling in 78% of the vote this year. It’s nice to see that nice guys like Andre can benefit from inflation.