Hoping to See Kearnsy in Goodyear 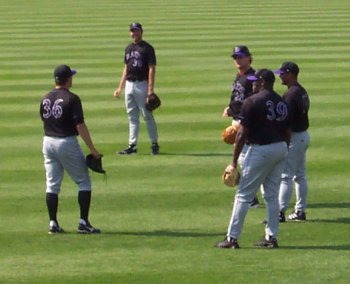 If the Red Hot Family is, indeed, able to make it out for a long weekend or (unlikely, but a girl can dream) a week to take in spring training baseball in Goodyear, AZ, we may be treated to an Austin Kearns sighting. He’s just signed on with the team who will be sharing the spring training facility with the Reds: the Cleveland Indians.

I don’t see the details of the deal, but it’s probably not terribly notable, since it’s a minor league deal with a non-roster invite to spring training. But all it’ll take is one game like the one I saw in Victory Field to get him in the starting nine. Of course, that was in 2005, before Ray King’s fat ass came into the picture.

Posted in Random Ramblings.
Comments Off on Hoping to See Kearnsy in Goodyear