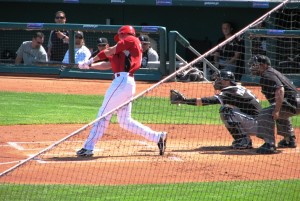 Joel Luckhaupt, formerly of the long-defunct Reds and Blues blog, has gotten published with a little article about Cincinnati Reds center fielder Drew Stubbs and bunting.

Stubbs has long frustrated baseball fans–and Marty Brennaman–with his strikeouts. Here’s a guy who may just be the fastest player in the major leagues, but he cannot seem to put his bat on the ball. While he may not be able to outrun a cheetah, many people feel that if he were to bunt, he could certainly outrun the throw to first.

But would it be worthwhile for a guy with the power that Stubbs has to change his approach and add bunting to his arsenal?

It’s hard to say if bunting more would fundamentally change Stubbs as a player. The majority of players that frequently use the bunt to get hits are slap hitters with nowhere near the level of power of Stubbs. And because of that, many of those players have to be successful bunters in order to stick in the big leagues. Otherwise, they typically don’t have enough tools in their arsenal to be any sort of a threat at the plate.

Luckhaupt then goes on to apply the mathy skillz that he employs during the season as the statistician for Fox Sports Ohio Reds’ broadcasts and tries to quantify what bunting more might do. And no, the TLDR has nothing to do with cranky old broadcasters. I’d encourage you to check out the whole thing. It’s a good read.

4 comments to “Joel on bunting”