Just as the grim reality of baseball being done for another year settles its cold weight upon the world, the grim reality of not getting enough sleep has settled on the RHM household. And, alas, it shows in episode 29 of the podcast. Hopefully the Crack Technical Staff is able to edit out at least some of the long pauses where we tuned out, staring into space, for moments of sleeping wakefulness. Or waking sleepfulness.

I&apos;m still tired even now. You can tell, can&apos;t you?

This week we talk about:

Posted in Podcasts.
Comments Off on Episode 29: Grogginess Sets In

Heh heh, I Gave Him the Stink Palm 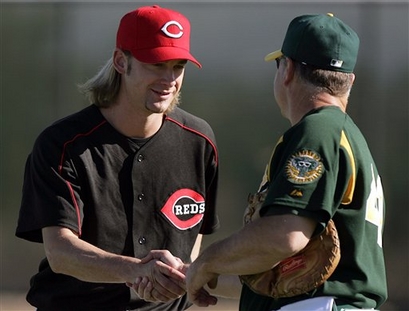 The AP comes through with some photos of the players who are going to Japan. If you haven't gotten to see enough of Arroyo lately, this might serve as your fix until proper photos start coming out of the Far East.
Posted in Random Ramblings.
1 Comment

I've been so caught up in an argument over the ethical implications of a database design, that I haven't had a chance at work to really catch up on my Reds' news. However, this thread on Strike 3 Forums caught my attention:

Money to Burn?
Apparently Will Carroll said this morning on Baseball Prospectus radio that the word is the Reds will have up to $25 million to spend during the off-season.

The thread gives a link to the program, which I have every intention of listening to eventually. In the meantime, let me know if he mentions how much of that $25 million is going to bringing back Richie.

Everyone's saying it by now, but I'll quote Marc, since it gets me a neat link in his “Links to this Post” section:

Rich Aurilia has decided to decline his $2 million mutual option for 2007.

The veteran infielder is now a free agent and still would be able to re-sign with the Reds. You'll recall he went through the same process last winter.

Of course, last season he couldn't get anyone to even accept his resume, let alone give him an interview. This year, the folks in New York mention him about every day.

You can imagine that the news of Aurilia's free agency hasn't escaped the New York Post, Kevin Kernan for whom made sure to mention it. Yesterday it was Mark Hale who dropped Aurilia's name. Both are talking about the possibility of him taking over second base for the Mets.

Posted in Wheeling and Dealing.
Comments Off on Aurilia a Free Agent