Well the good folks over at mlblogs.com have once again prevented me from logging into my blog, so thanks to Red Hot Mama I will post my analysis here in the Diaries section of her site until I get the glitch worked out at my own blog.

Let's start with Alex Gonzalez, our new shortstop. My initial reaction was one of disappointment, but I did include a disclaimer that I didn't know much about the kid and would have to do more research. I am now convinced this was an excellent move by Kriv-dawg who now finds himself on the hotseat because of the fallout from the Kearns/Lopez deal. Gonzalez is no stranger to WINNING, being the owner of a nice shiny world series ring from that miraculous Marlins team of 2003 and more recently having been in the thick of a heated pennant race with the Red Sox. His defensive range is superb and he makes incredible plays look routine. No one questions his defensive prowess, it is the offensive woes that have raised more than a few eyebrows amongs the Redlegs faithful. After having done my diligent research I am not concerned about his offensive shortcomings, assuming he bats at the bottom of the lineup. If narron bats him 2nd we are in big trouble, but not even Jerry Narron could do something so irrational, right? What's that you say? He batted Royce Clayton 2nd? Hmmm, good point… yea we might be in trouble.

But seriously… It is not unusual for AGon to have a big month. For instance he batted .352 this past June and followed that up by hitting .325in July. Not too shabby. His paltry OBP is less of a problem if he bats 8th, and he does have surprising power that could mesh well with the favorable conditions of GABP. 20 home runs at the bottom of the lineup would be quite nice, and its not so hard to imagine. It should be noted he batted an anemic .103 with runners in scoring position and 2 outs last year, so his clutchness is highly suspect, but again if he is batting 8th it is ok, and its safe to assume he can only improve on that kind of statistic. He'll be just 30 years young next season, so it is entirely possible he matures as a hitter sometime soon. David Ross, for instance, found his stroke at the same age. The Red Sox fans were far more happy with AGon than they were with Renteria, so that should tell us something as well, because you could do a lot worse than Edgar Renteria as your SS.

Let's move on to Mike Stanton, a new member of the bullpen. Here's another guy with a winning history. He's been in the heat of pennant races and playoffs, having won a world series championship as a member of the Yankees. No one questions his mettle in pressure moments as he was one of Mariano Rivera's primary set-up men. What we do question is his age. Still, nothing ventured, nothing gained, and there aren't many options in the free agent market so this was a perfectly understandable gamble. Apparently Kriv-dawg had to add an extra year on the contract (making it a 2 year deal) to beat out the competition and secure Stanton. I will make the bold assertion that Stanton cannot possibly make the current bullpen any worse.

Last and definitely least is good ol' boy Jason LaRue, who is either the greatest poker player ever, or simply could care less about playing in the postseason, because he is thrilled at the prospect of being shipped off to Kansas City, baseball's equivalent to purgatory. The ironic and best part of this lowpoint in his career will be when he gets into a heated battle with John Buck for the starting position. My money is on Buck because even LaRue admits he is a slow starter. I guess him and Luke Hudson can have a couple of cold ones as they relive better times, like the vaunted 2004 season when Hudson outdueled Kerry Wood at Wrigley Field. I wonder if LaRue was catching that day….

And that's that. Right now the million dollar question is if Adam Dunn is being shopped around and if so, what will we get for him. If we can't get adequate compensation Kriv-dawg might wait until his stock gets higher, like he did with Kearns last season. Assuming Dunn sticks the lineup looks like this:

which means the second game of the season the lineup Narron posts will be this one:

Ah the Reds, such a funny team. Anything is possible with this club of characters.

This week on the podcast, the Crack Technical Staff and I overcome our minor health ailments to chat about the news around Redsland and all of the world of baseball. Here&apos;s the stuff we talk about:

Posted in Podcasts.
Comments Off on Episode 32: Contractpalooza

Which appears on Marc's blog courtesy of the guy who is not Marc yet writes there anyway.

I'm not sure whether I'll be able to make the full two weeks like I have the last two years, but I'm psyched about the final week, which I'm currently planning to attend:

Should you make it down to Florida for spring training, you must find an opportunity to hit the Phillies facility in Clearwater; it's just beautiful. Of course, if you make it down after next year, you may find that the Reds' new facility has become the fairest in the land. 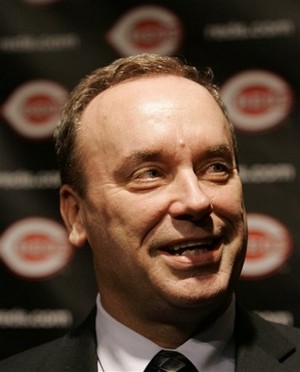 Reds General Manager Wayne Krivsky shows off his transaction: he hired a Personal Lighting Engineer earlier this week. Rumored future moves include a Personal Theme Song by John Williams.
Posted in Pretend Captions.
Comments Off on Setting the Mood

The Pole Poll and Polls in General

Congratulations to KC2HMZ, the winner of our Dick Pole Limerick Contest. His entry, below, garnered four votes. Not bad for my first poll:


There once was an old coach named Dick
Who could teach pitchers wonderful tricks
But he'd barter his soul
To achieve his true goal:
A name that did not suggest pricks.

For winning the contest, HMZ will receive an autographed copy of the increasingly out-of-date Funnyball, a freebie bumper sticker that I picked up at the Reds Caravan stop in Indy last year, some matchbooks that are technically illegal to mail, and a small amount of rhinovirus, since I'm home sick with the sniffles today.

So, as of today, we've got a new poll. This one asks “Which new Red will help the team the most?” Choices include Bubba Crosby, Alex Gonzalez, Lack of Jason LaRue, and Jeff Brantley. See the right-sidebar to vote.