Because he's already sold out. Today the Astros signed him to a 6-year/$100 million contract. Says Astros.com:

Lee's contract will pay him $11 million in 2007, plus a $3 million signing bonus. He will receive $12 million for 2008 and $18.5 million for each of the last four years of the contract, which runs through the 2012 season. The agreement contains a full no-trade clause for the first four years and a limited no-trade clause the final two years, during which Lee and the Astros must agree on which teams he can be dealt to in the event the Astros decide to trade him.

It's not that I ever expected the Reds to pursue Lee--we've already got a power left-fielder to worry about--but I'm not at all pleased to see him land in Houston. This was a team that we've always counted on to be offensively anemic. If they start hitting, what's next? The Cubs meeting expectations? The Brewers failing to go entirely unnoticed? The Pirates winning??

It's a mad world, my friends.

Posted in Wheeling and Dealing.
Comments Off on Take Carlos Lee off your Christmas List

If Gary Matthews Jr, age 32, a career .263 hitter with little power or speed and a strikeout to walk ratio of approx. 2 to 1 is worth a whopping 5 year contract for 50 million, Adam Dunn is certainly a bargain for the Reds despite his glaring shortcomings.

Coming off a diappointing .239 season with 194 strikeouts and a slew of fielding miscues, it is safe to say that Adam Dunn's stock has never been lower. And yet he is a lock to hit 40+ home runs again. Is there really anywhere but up as far as his batting average is concerned? You have to give the new batting coach, Brook jacoby, an opportunity to give Dunner some new tips, advice, perspective, philosophy -- whatever it is those guys do to earn their salary.

I believe Krivsky has every intention of waiting on Dunn, although I wouldn't be shocked if he puts out feelers just to see what the market might be offering for the Big Donkey. Unless an offer is simply to good to resist, I expect him to hold pat. Let us not forgot that Dunn was his signing, one of his very first acts as GM. It's fine and good, to dump your predecessors long term contracts (LaRue) but when you start second-guessing yourself that is another matter, and I don't expect Krivsky to hit the panic button just yet.

Dunn's power is legendary. He will be just 27 years old in 2007 and already has 198 career home runs. If he hits 40 home runs for 10 more seasons, he is right around 600 and would still just be 37 years old. A couple of big years in there and assuming he can play into his 40s and your looking at a top 5 all-time home run hitter. Of course he would probably have the most strikeouots in history as well. The point is he very well might crack his way into the hall-of-fame by sheer foce of brute power. He certainly has a much much greater chance than Gary Matthews, Jr. and they are making the same salary right now.

What I would strongly recommend to all parties involved, is that Dunn be given agility and dexterity exercises from here on out. Nothing wrong with his hand-eye coordination, I am referring to his movement. He needs to look and act lighter on his feet. There must be training drills for this sort of thing, and now would be the time to explore those options. Have him tip toe around pylons and run through those tires and all of that.

I can't tell you how many times I saw Dunn pursue a ball in the outfield to only come up just inches short of reaching it. Incredibly frustrating to witness, and the resulting hits were backbreakers that went for doubles and triples. If runners were on base they scored easily. We know Dunn can't go airborne but if he can get better jumps and get his weight moving at the correct angle from the very beginning of the play, maybe some of those extrabase hits become huge rally-snuffing outs. Part of it must be confidence (lack of) because let's face it after grossly misplaying 3 or 4 balls on opening day he probably became much more tentative in his pursuit. Maybe I am wrong about that, I don't know firsthand what the guy is thinking, but like his batting average, his fielding and range can only get better, not worse, because right now its at rock-bottom. There's only one way left to go and that is up.

Right now Dunn is pretty much the key to this team. He bats in the heart of the order and he is in his prime and next to Griffey he absorbs the most salary. As Griffey's star fades, Dunn must be the one to pick up the power slack. He is at an absolute critical juncture as far as his tenure with the Reds is concerned. A big year showing improvement in his weak areas and perhaps he stays for the longhaul. One more season like the last one and he might be traded for middle relievers and prospects in a tragic salary dump. It can go either way, and that will be the major storyline for this season. 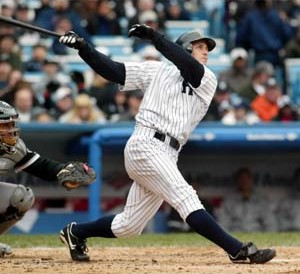 Just put up a human league profile about Bubba Crosby. Check it out to learn up on everyone's favorite new Bubba.

Posted in Bubba Crosby.
Comments Off on References

Posted in Uncategorized.
Comments Off on References