The Crack Technical Staff took over 100 pictures today. Perhaps we’ll put up a gallery that will persist far longer than 72 hours. But not yet: right now I just want to get some sleep and get ready to do it all again tomorrow in St. Petersburg.

However, since we got a special request for some Andy Phillips photos, we’re staying up a little later to meet the needs of our reading public. 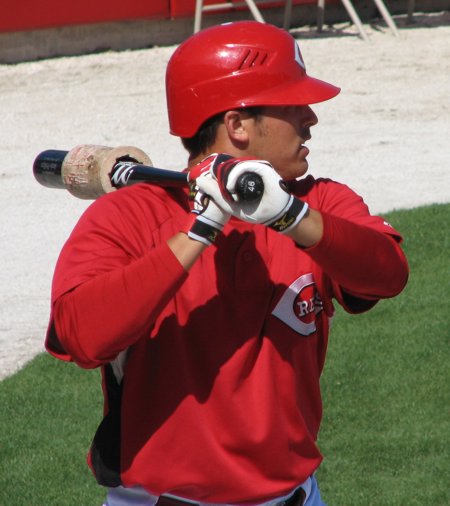 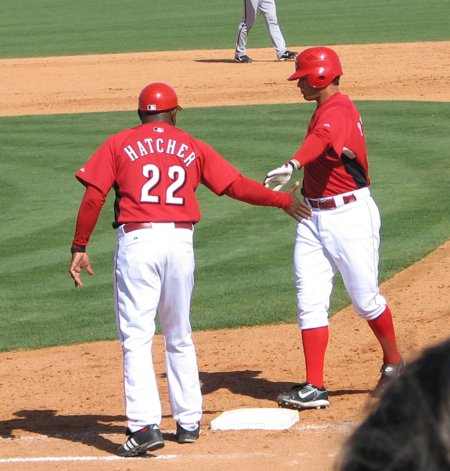 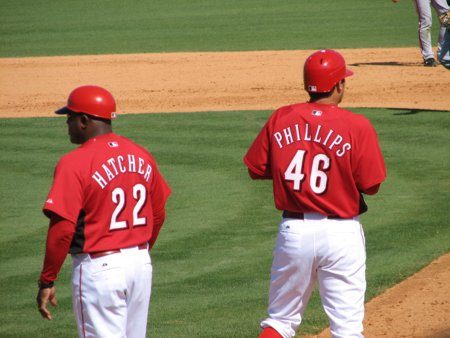 Here’s a video of his pre-batting routine. 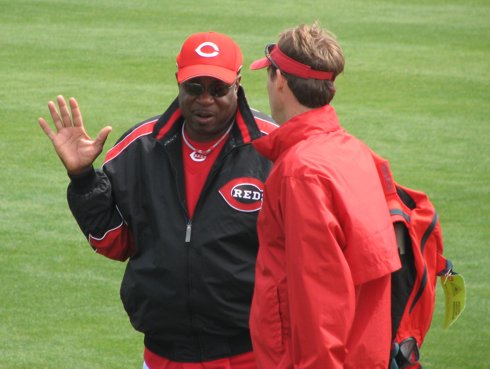 “Of course we’re gonna win. Don’t you know I was the guy in the on-deck circle when Hank Aaron broke Babe Ruth’s home run record?”

I intended to do provide an NL Central injury report on a semi-weekly basis, but work and traveling to Sarasota got in the way. Of course, players keep getting injured, so there’s no real way to be “late” on this. Well, except I didn’t get to write about outfielder Felix Pie’s testicle first.

Other than Pie, the poster boy for the unluckiness that comes from being a Cub, both third baseman Aramis Ramirez and outfielder Alfonso Soriano suffered and returned from injuries. Ramirez came back Friday from shoulder tightness, springing into midseason form by sporting an 0-fer. Soriano played his first game today, seeming to have healed his broken finger magically quickly. His hamstrings, however, still need work.

For the Reds, both catcher David Ross and shortstop Alex Gonzalez are missing games. Ross’ injury is far less serious, or at least it is upon first glance. But anytime “back spasms” are a problem with a full-time catcher on the wrong side of 30, eyebrows have to be raised. Or in Javier Valentin‘s case, mustaches. If Ross doesn’t return by Opening Day, Valentin will be the starting catcher. And I don’t have a problem with that.

Gonzalez’ injury is far more serious as he’s suffering from a fractured left knee. After all his trauma with his sick son preventing him from playing last year, it doesn’t look good for the shortstop this year. He’ll be reevaluated in two weeks, so who knows when he’ll be able to play baseball again. I expect he’ll be starting the season on the DL.

In St. Louis, the Cardinals have lost one of their leading left-handed relievers through the start of the season. Tyler Johnson has been diagnosed with tendinitis and a rotator cuff sprain. No surgery is needed for recovery, just time. Which is great news for Ron Villone, who’s competing for a left-handed bullpen spot.

Also, the right elbow of Albert Pujols is apparently attached with nothing more than grit, stubbornness, and lies about his age. Pujols has a torn ligament, bone spurs, and arthritis. Season-ending surgery is required, but the Cardinals are holding it off because they obviously want Pujols to save his DL year for when they’re going to be in contention.

And lastly, Houston Astros second baseman Kaz Matsui is experiencing a spot of discomfort. He had to miss one game at the end of February and is returning from Spring Training to Houston to see a hemorrhoids specialist, hoping to speed up the healing. I guess they don’t make cushions for second base.