Secret to Success is Leaving Houston 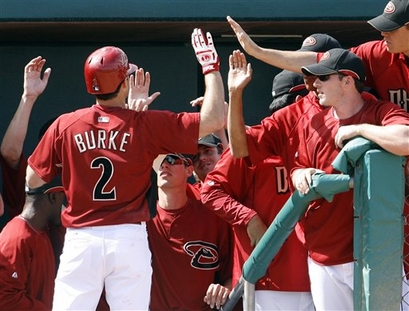 Lisa Gray at The Astros Dugout took a look today at the spring training performance of some recent, but no-longer Astros in comparison to the guys who replaced them:

The list goes on. You’ll want to click over there to read the whole thing. I mention Chris Burke there specifically because that’s him in the picture. It looks like Astros red, but if you look carefully you can see that it’s actually the crimson of the Diamondbacks. If you’re bothering to look that high.

Contrary to popular belief, the world failed to end on Monday night when Tom, my buddy and the foremost Pacer’s blogger, received media credentials for a Pacers’ game at Conseco Fieldhouse.

Just listen to his outlandish behavior:

Once I was set to go, I wanted to make sure I represented the blogosphere well. So, after I picked up the credential I tried to stay out of the way and observe while others were working. I had my voice recorder just in case and a notebook. Before the game I hung out in the media room and pored over the game notes.

Shocking. And how did he deal with going into the locker room after the game?

Finally, I approached Stevie, remembered to press record, and asked him a few questions. As expected, he was great. On my way out, I spoke to Mike Wells who was real nice even after I mentioned my blog.

Congratulations to Tom and Indy Cornrows. May we follow in his footsteps someday.