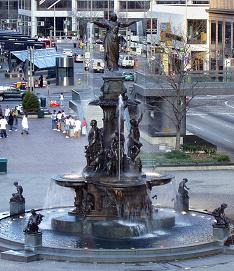 It was the event that was made for me!

What do you get when you combine the hottest home games of the Cincinnati Reds season with the hottest place to be in Downtown Cincinnati? Reds Hot Weekends!

The Cincinnati Reds and Fountain Square Management are teaming up to create seven â€œReds Hot Weekendâ€ celebrations from May to September, offering local fans and out-of-town guests some free entertainment and a warm welcome to Fountain Square and the heart of our city.

Local Reds fans and visitors in town for the games can meet, mingle and gear up for the series before heading down to the ballpark for the 7:10 p.m. games on Friday and Saturday. On Sunday afternoon, stop by Fountain Square on your way home for free ice cream from UDF and meet the Reds Rally Girls and Gapper.

Posted in Random Ramblings.
Comments Off on Reds Hot Weekend

Cubs 3, Astros 5: The Search for a Fourth Starter Continues

The Cubs continue to search for a fourth and fifth starter for their rotation. Sean Gallagher was up for the audition today, and things looked promising when Derek Lee homered in a three-run top of the first. Of course, Gallagher hadn’t pitched yet.

Actually, Gallagher did fine until the third when Carlos Lee homered and gave the Astros the lead that they wouldn’t relinquish. The Astros moved a game closer to the Cubs and are now only 1.5 games back.

The Cubs have a day off, hoping to regroup after losing yet another series to a team in their division. The Astros host the Phillies with Kyle Kendrick starting against Roy Oswalt at 8:05pm EDT.

Now that the Pirates reminded the Brewers how to win a game, it looks like Milwaukee liked it and wants some more, please.

Rickie Weeks had what he hopes was a slump-busting home run and Ben Sheets pitched a complete game, allowing only one run. That one run was a Xavier Nady solo shot in the 4th.

The Pirates try once more to deal with this formerly sleeping giant they awakened when Tom Gorzelanny faces Dave Bush at 7:05pm EDT.

Reds 2, Dodgers 5: My Dream Was Better

As I fell asleep watching Johnny Cueto continue his rookie struggles, the Reds were foremost in my thoughts. I then proceeded to have this awesome dream where Ken Griffey, Jr. took the team on his back–without breaking it!–and proceeded to launch three home runs to lead the team to victory, prevent the sweep at the hands of the once-hated Dodgers, and prevent the losing.

Then I woke up and saw the team once again lost and Griffey, like he has most of this year, was a complete non-factor in the game. Still, it would have been nice. And what a way to reach 600.

Fantasy is better than reality when it comes to the Reds, I’m afraid. They’ll try to change that when they travel to Aaron Harang’s hometown today. Harang gets the start, which doesn’t bode well for Griffey’s offensive chances, considering the dearth of scoring for Harang. He’ll face Randy Wolf at 10:05pm EDT.