CINCINNATI, OHIO – It’s time for Reds baseball, and this season, fans can watch the Reds on FOX Sports Ohio AND get a great deal to head to Great American Ball Park and take in a live game.

In partnership with the Cincinnati Reds, FOX Sports Ohio is excited to announce Ticket Tuesday, a special ticket promotion that will be offered to viewers every Tuesday Reds game all season long.

Fans who tune into Reds games on Tuesdays will learn of a special ticket deal offered by FOX Sports Ohio and the Reds. It will be a limited time offer only available during that Tuesday’s telecast. Each new Tuesday Reds game on FOX Sports Ohio will bring a new exclusive ticket offer.

The first Ticket Tuesday will be next Tuesday, April 5th, when the Reds take on the Houston Astros at 7pm at Great American Ball Park. Tune in to Reds Live Pregame Show at 6:30pm to learn of the first limited time ticket offer. Viewers can also visit www.foxsportsohio.com during the game for details. 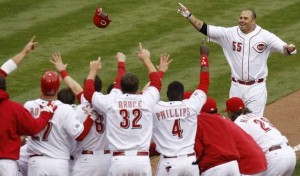 Last Game
The last Cincinnati Reds game was a meaningless exhibition affair, although the Reds did win it.

Next Game
The most important baseball day of the year: Opening Day. The Reds open the season at home, naturally, against the Milwaukee Brewers. Edinson Volquez gets the honors for Cincinnati, while the Brewers send out Yovani Gallardo. The game will be televised by Fox Sports Ohio and broadcast on 700 WLW. The first pitch is scheduled for 2:10pm EDT, but there’s another cool thing before then.

The Other Cool Thing Before Then
That cool thing before the first pitch of the first game would be the Findlay Market parade. This year marks its 92nd time, and the grand marshal will be Joe Morgan. The parade starts at 11am.

The Cincinnati Enquirer has put together a nice guide to Opening Day, with tips on places to park and best spots to watch the parade, as well as what to wear and pack. The best tip is probably this one:

It’s a holiday in Cincinnati, so make sure to enjoy it.

What to Say to Sound Smart at the Water Cooler
Edinson Volquez’ start today will be the first opening day start for a pitcher not named Aaron Harang since 2005, when Paul Wilson got the ball.

Opening Day for the 2011 season is finally here! I’m pretty excited about it, and for the first time in a long time, I have legitimate hopes of the Cincinnati Reds doing well. (I wasn’t nearly so optimistic about them last year.)

Without further rambling, here’s my guesses about the finishing places of each of the teams in the 2011 National League Central. Let’s hope I’m more accurate than I was in my NCAA bracket, where I predicted 0 of the Final Four.

6th: Houston Astros
It looks to me like the Astros gave up on this season as last season was winding up. I see nothing from them: not pitching, not batting, not fielding, and not promising rookies. Their minor league system is consistently ranked as one of the worst in the majors, and the owner is trying to sell the team. Mark this as another lost year.

5th: Pittsburgh Pirates
There’s a lot I like about the Pirates. Every year they try. It’s usually misdirected–I’m looking at you Dave Littlefield–but it’s an attempt. And unlike the Astros this year, the Pirates are trying, and a bit more intelligently these days. Between Andrew McCutcheon and Jose Tabata, they have two young players that people outside of the organization think will be good ball players. And there are more with promise.

The team still doesn’t have enough to be competitive, but it feels like they’re closer than they’ve been in a long time. The Pirates have actually accumulated real talent since Neal Huntington took over, and if the players reach their potential, a competent year might not be a ridiculous pipe dream.

It won’t happen in 2011. They’ll have another losing season. What will that be? 19? Ouch. But they’ll be better than the Astros.

4th: Chicago Cubs
The Cubs owe too much money to too many old players who can’t come close to producing enough to make it worthwhile. Alfonso Soriano, Aramis Ramirez, Kosuke Fukdome, etc. The list of bad contracts is long, and the Cubs now seem to be waiting until some of them end. (They’ll be waiting a long time for Soriano’s.)

The club has a new manager and did show some new moves, letting Carlos Silva go after a mediocre spring training. Silva also got into a dugout fight with his teammates, like Zambrano last year. Apparently, the Cubs don’t want to put up with that any more. That’s probably a good thing. It’s hard to be a lovable loser when your team is covered in self-inflicted bruises. No one loves cutters.

The Cubs should be the best of the bottom half of the Central. Unfortunately, as I know from the Reds achieving that a time or two, there’s no trophy for that.

3rd: St. Louis Cardinals
How the mighty have fallen. The Cardinals are hard to predict. Sure, they have Albert Pujols, but there’s so little around him. Outside of Matt Holliday, the team has no real offense. Sure, they signed Lance Berkman to serve as protection, but I don’t think that’s going to work. Plus, the addition of him–and Ryan Theriot at short–gives them a bad defense.

Losing Adam Wainwright was a huge blow. His absence will place a lot more strain or an already fragile Chris Carpenter, and the young Jaime Garcia. The team will win more than it loses, but it doesn’t have the depth to last the grueling 162-game marathon.

2nd: Milwaukee Brewers
The Brewers made the biggest splash this off-season, getting Zach Greinke and Shaun Marcum to instantly upgrade their starting rotation. It was quite an upgrade. Unfortunately, Greinke hurt a rib playing basketball and will miss a couple weeks at the start of the season. Also, Marcum had some health issues during Spring Training.

Still, those guys the Brewers emptied their farm system for will pitch a lot of games. And the offense, lead by Prince Fielder, will score a lot of runs. But the primary reason I’m not picking the Brewers for first place is because of their defense. I think it’s bad enough that it’ll make the studs in the rotation that much more ineffective. And I’ve seen firsthand how much worse pitching can be when the defense behind it is unstable.

1st: Cincinnati Reds
Like there was ever any doubt. The Reds are the defending Central division champions, and I don’t think anything has changed to unseat them. They have one of the best offenses in the majors, lead by the 2010 Most Valuable Player Joey Votto. Behind him, Jay Bruce and Drew Stubbs seem set to have excellent years, themselves. They also have one of the best defenses in the majors. New this year is a competent glove at shortstop in Paul Janish.

That makes one of the deepest pitching staffs all the better. While the team doesn’t have any starters in the true ace mold–and they did have their share of injuries in the final week of spring training–they do make up for it in numbers. And unlike the Jim Bowden garbage years, these pitchers are good and can be expected to keep the team in the game.

This is a good team. Unlike the 2000s, the ifs surrounding this team would take them from good to great. The Reds have a lot to play for. They were embarrassed in the 2010 playoffs. The only way to change that is to get back there. Granted, no Reds team has made the playoffs in back-to-back years since the 1975-76 Reds, but I’m predicting that this is the year it happens again.

And it starts today.

Dreaming of a White Opening Day 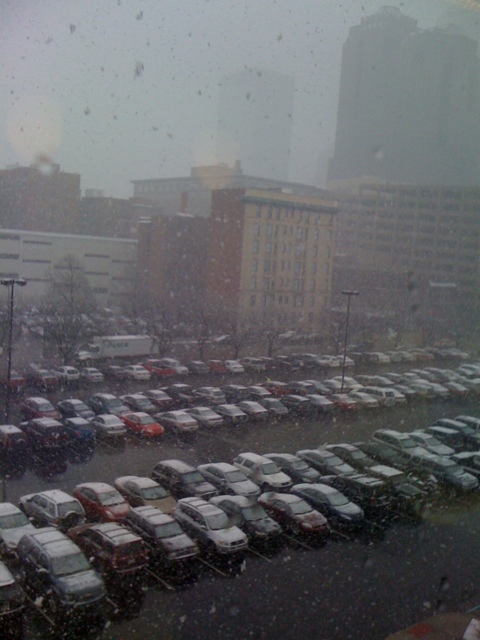 Will Opening Day be the first snow-out of the season? Or will the blazing 50-degree high my iPhone is forecasting for Cincy tomorrow burn all this off?

Posted in Cincinnati Reds, Random Ramblings.
Comments Off on Dreaming of a White Opening Day