The only downside to a nonstop flight is when you don’t plan your eating right and end up landing in Phoenix having not eaten a meal in 11 hours. Thank goodness that the Brothers Pizza is close by. 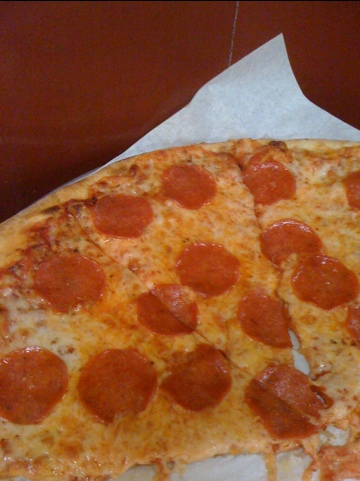 We ordered the pitcher of Bud Light (get the big one, it’s $2 more for twice the beer) and the nightly special: a pizza and wings. The BBQ sauce is really good and the pizza is fab. Just what we needed to recover from our long sojourn from the Midwest. 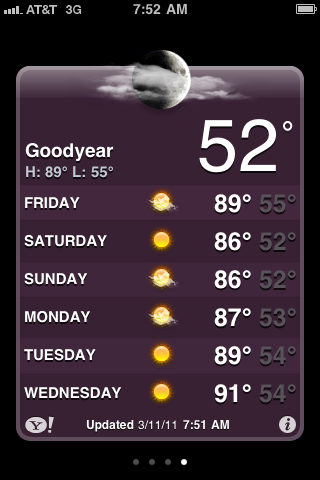 The day has finally arrived! After a day of packing and getting the house ready (and maybe one or two beers in the afternoon), I and my family will be hopping our flight to Goodyear, AZ.

It’s just a long weekend; nothing like the glories of the 1- or 2-week long visits of the past, but who can complain about a forecast like this? (Not the current temperature; it’s still only 6 a.m. there.)

Nevermind that it’s going to feel like flying into the depths of Hell after a few weeks of getting used to 55 feeling like t-shirt weather out here in the Midwest.

So, as soon as this evening, RHM will be hosting some southwestern pictures, though we don’t actually attend a game until tomorrow until we see the non-Las-Vegas leg of the split squad game at the Cubs facility. Then Sunday we’ll go to our only home game against the Angels, and Monday we’ll go out to the Rockies park.

I’d like to spend more time at the Goodyear facility when we go out for these weekend trips, but the team never seems to have a significant homestand. At least we’ll get to try the island noodles at three different parks.

Posted in Cincinnati Reds, Spring Training.
Comments Off on Get Away Day