The Chicago Cubs came to Goodyear to face the Cincinnati Reds today and left after the 10-run rule came into play.

Johnny Cueto started for the Reds and went three innings, allowing no runs. He was followed by an unusually sharp Francisco Cordero. In what we can only hope is a harbinger of improvement this season, Cordero had a perfect inning and struck out two. That’s right! Instead of his usual bases-on-balls, he actually recorded some strikeouts!

Overall, the Reds pitching was outstanding, limiting the Cubs to two hits. At one point, they’d retired 16 batters in a row.

On the offensive side of things, it was the unusual tandem of Paul Janish and Edgar Renteria who got the beating started. Both were playing–Renteria at second and Janish at short–and both had two-hit days. Combined, they scored three runs, driven in by Juan Francisco and Chris Heisey. Only one of the 10 runs was from a homer, and that was from Zach Cozart in the 5th. Definitely not a good day to be a Cubs pitcher, if there ever is one.

Cueto picked up the win, while rotation candidate Todd Wellemeyer gets the loss. 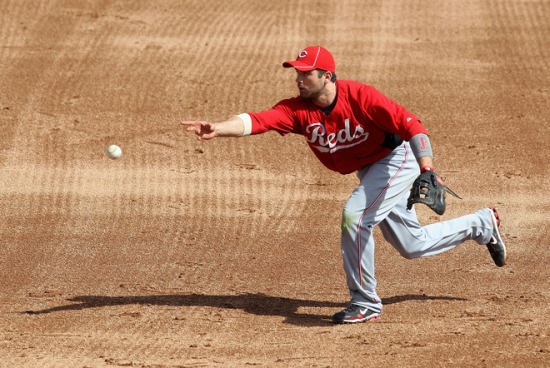