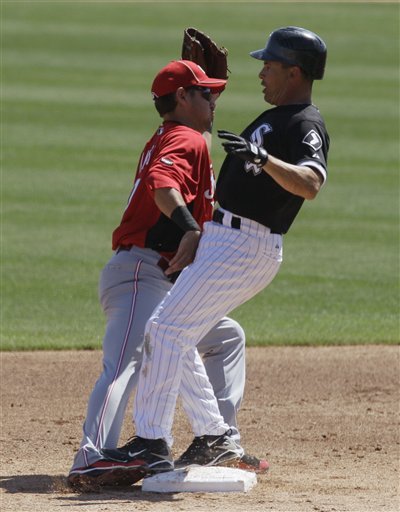 How would you like it if I can down to *your* work and took high speed photography of every time *you* ran into Omar Vizquel?
Posted in Cincinnati Reds, Paul Janish, Pretend Captions, Spring Training.
Comments Off on Paul Janish freeze frame

The Unofficial Roster…Hang on a Minute

The Cincinnati Reds have unofficially set the 2011 opening day roster, according to John Fay.

The Reds roster doesn’t have to be officially set until Thursday at 11 a.m. But it’s all but official right now. The Reds currently have 30 players in camp. Four of them — Jose Arredondo, Fred Lewis, Homer Bailey and Johnny Cueto — will start the year on the disabled list.

Of course, subtracting 4 from 30 gives you 26. Who’s that extra player? The mustachioed Corky Miller. Basically, if Ramon Hernandez’s elbow is healthy, Miller will start the year in Louisville. If not, the Reds will be starting 2011 with the Corkster.

Or at least, that’s the way things stood today before the game against the Chicago White Sox. During the seventh inning, reliever Jared Burton left the game before the inning was over.

Burton told Baker the problem was he could not get his shoulder extended when reaching back to throw.

He will be examined again tomorrow.

Dang. There’s only one Spring Training game left. Can this team manage to get through it without someone else being injured?

Posted in Cincinnati Reds, NL Central, Spring Training, Wheeling and Dealing.
Comments Off on The Unofficial Roster…Hang on a Minute