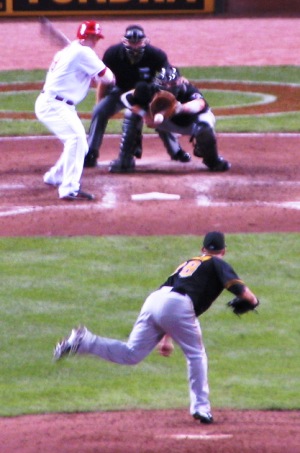 Yesterday’s titanic struggle against the Chicago Cubs was game 34 of the 2011 season for the Reds, and the team’s 18th win. It was also the first game of the season in which Joey Votto started but did not get on base during the whole game. The on-base streak had been the matter of some discussion, as Votto was coming up on the Consecutive Games of Getting On Base to Start the Season, set at 34 by Dave Collins in 1981.

In fact, Votto didn’t have a particularly good series in Chicago at all this time around. He was 1-for-9 with 3 walks in the series, which is a far cry from the .333 he’s averaging and the .464 he’s on-basing so far this season. It seems a little too Griffey-ish to blame the down series on worry over the streak. More likely the Wrigley batter’s eye is painted just the wrong shade of black or something like that. But if there was any pressure from the streak having an effect on his performance, then I’m super-excited to see what he’s going to do now that it’s broken.