Today was a busy day at the Red Hot Household, so this morning my Blog Jog training doubled as a mode of transportation to get me from my son’s little league game to my massage appointment. Nothing like a relaxing massage while sweat is still actively coming from your pores. 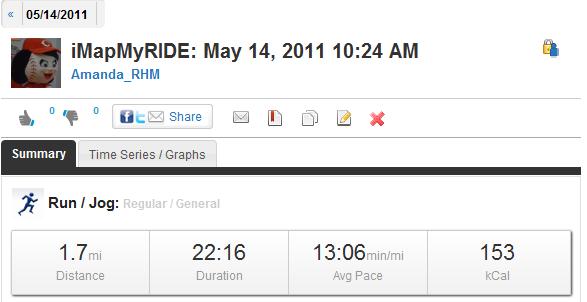 Speaking of the Blog Jog, this is something you can be a part of, too, and walking is perfectly acceptable if you don’t want to put yourself through what I’m putting myself through now. If you’d like to join in the fun, log on to http://reds.com/5k to sign up for the Redlegs Run, then email [email protected] to RSVP to the Blog Jog proper. You have to pay to be in the run, but you don’t have to pay any extra to hang around with the bloggers.

Catching Up on Reds Transactions

There’ve been a few moves that the Cincinnati Reds have made in the last two days that it feels like I haven’t had enough time to comment on.

First, before yesterday’s amazing baseball game, the Reds decided Scott Rolen was ready and activated him from the disabled list. Backup infielder Chris Valaika was optioned to AAA to the Louisville Bats to make room. Clearly, they were right. Rolen went 3-5 and drove in a run, injecting further life into the offense. I hope he can stay healthy this time. His absence is painful to the team’s winning.

Before today’s game, the Reds made another move. This time, they activated reliever Jose Arredondo. Arredondo has never pitched for the Reds before and hasn’t pitched in the majors since 2009. The Reds signed him just before he had Tommy John surgery last year, and he’s been rehabbing ever since. His rehabilitation stats have been very promising. And if he’s back to the form he was before the injury, the Reds’ bullpen just got a lot stronger.

“He was one of top pitchers in the American League before he got hurt,” Baker said. “He can make (Nick) Masset and (Logan) Ondrusek better. He can throw a lot. He can go two innings. Hopefully, he’ll make us better.”

To make room for Arredondo, struggling pitcher Mike Leake was optioned to Louisville. This will be Leake’s first time spent in the minors, but it is needed. As I ranted about recently, Leake has no experience as a reliever. He’s been a starter, and having him learn to be a reliever at the major league level was failing miserably. Him relieving isn’t the plan, though.

Leake will be used as a starter at Triple-A.

“He’ll continue to do that for a while for a couple of reasons,” Jocketty said. “In case, we have a need for a starter. There are still some things he has to work on to get back to what he did last year.”

That makes sense. Leake’s been solid as a starter, and injuries do–and have–happened. I have a feeling that pitching on a regular basis again will do wonders for his control.

Posted in Cincinnati Reds, NL Central, Wheeling and Dealing.
Comments Off on Catching Up on Reds Transactions