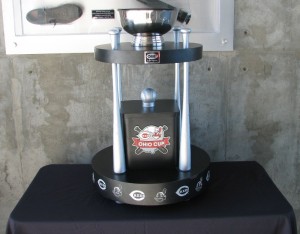 I guess this belongs to Cleveland now

The Cincinnati Reds dropped their fourth game in a row today. I don’t know about you, but it feels like at least one more than that. I mean, it feels like the Reds have equaled their previous winning streak. But if they do lose in the final game with the Cleveland Indians tomorrow, at least we’ll know they’re assured of another five-game winning streak next.

Homer Bailey was the starter for the Reds and turned in a very good outing–one more than good enough for a win. He went 7 innings, allowed just 2 runs, and struck out 4. However, the Indians have been able to completely shut down the Reds’ offense.

Joey Votto’s power outage continues, as he was 0-3 with a walk on the day. Unfortunately, he only had one at-bat with a runner on base the entire day.

Jonny Gomes also continues to struggle. He was 0-4 with three strikeouts, and he looked lost. His stint as the designated hitter for this series–ostensibly letting him focus on only hitting for a change–is turning out to be a failure. He’s swinging at terrible pitches and has no feel for the ball. His average has fallen to .171 and the Reds need him to find his bat again soon.

The sole offense came from an RBI off the bat of Scott Rolen. It gave the Reds the first lead, but most of the time, you need more than one run to win. Today, the Reds would’ve needed 3. Getting that many with a total of 4 hits is very difficult.

As mentioned above, the Reds have now lost four in a row, mirroring the St. Louis Cardinals’ 2010 drop-off after sweeping the Reds. Tomorrow, they attempt to make the Ohio Cup series respectable.