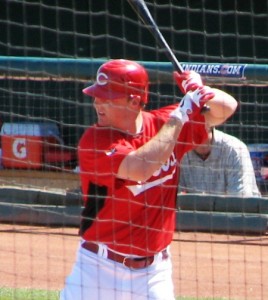 Bruce at the plate

Jay Bruce has been the brightest spot for the Cincinnati Reds during a tough stretch in the month of May. And his outstanding offensive showing has been awarded.

Cincinnati Reds right fielder Jay Bruce has been named the National League Player of the Week for the period of May 23-29, 2011. The announcement was made earlier today on MLB Network.

The Reds slugger led the Majors with 13 RBI and 25 total bases, and was tied for first with four home runs last week while hitting .353 (12-for-34) in seven games. His 12 hits ranked second among National Leaguers while his .735 slugging percentage was fifth and his six runs scored were sixth-best. The 24-year-old Texan had four multi-hit games on the week, including two three-hit performances. On Monday, May 23rd, Bruce went 3-for-4 and provided Cincinnati its only offense with a three-run homer in a 10-3 loss at Citizens Bank Park in Philadelphia. On May 25th, the 2005 first round pick (12th overall by the Reds) in the First-Year Player Draft went 3-for-8 with a home run while driving in three runs as the Reds dropped a 19- inning marathon to the Phillies, 5-4. The next day, Bruce went 2-for-4 with a home run and two RBI as the Reds dropped the third game of their four-game set in Philadelphia, 10-4. The left-handed hitting Bruce homered again on May 29th, going 2-for-3 with a solo shot as the Braves edged the Reds, 2-1 at Turner Field in Atlanta. Jay’s week continued a torrid month of May in which he now has 12 homers and 32 RBI. His 31 homers since August 2010 are tops in the National League. This is his second career weekly award, having previously won for the week of October 3, 2010.

The National League Player of the Week, Jay Bruce, will be awarded a watch courtesy of Game Time, the leader in licensed sports watches, available at MLB.com.

Enjoy that watch, Jay! And I hope you’ll have a player of the month award to add to the collection soon.