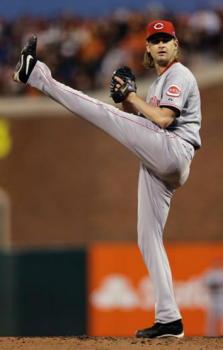 Last Game
The Reds had an authoritative victory over the Giants last night, 9-0. The win gives them Ws in the first 2 games and puts them in a real nice situation as they come home to finish out the series: 3 more chances to get 1 more win, all in the comfort of their own home field.

Bronson Arroyo was the winner, and he definitely earned the title. He allowed just 1 hit and 1 walk in 7.0 innings, all in just 91 pitches. His velocity was all over the place, as was his placement, so the Giants never could figure out what he was going to do next. Dude made it look easy.

Next Game
The Reds are off today to travel home to claim their “home field advantage.” They’re back in action tomorrow at the strange start time of 5:30 p.m. Homer Bailey was already home, though, seeing as he got the call to start game 3 for the Reds. He’ll be facing off against Ryan Vogelsong for the Giants. 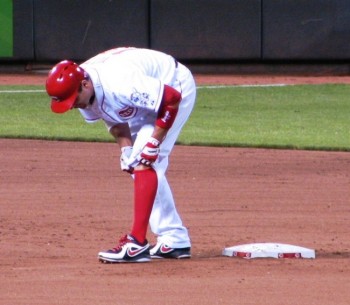 Votto’s Awesomeness Confounds Commentators
If you’ve been watching the first two games of this series, you know that the commentators simply cannot get over the fact that Joey Votto hasn’t hit a zillion home runs this year. “He’s just not the hitter he was before the surgery,” they say, shaking their heads as if Votto’s turned out to be some tragic disappointment to Cincinnati.

I guess the baseball generalist with a shallow understanding of the team just doesn’t get it. It must seem impossible for a guy who is as central to the organization (and as well-paid) as Votto is can possibly be a humble on-base machine. It probably didn’t help when he went 0-for-3 in game 1. But he went 3-for-4 in game 2, bringing his post-season stats nicely in line.

It’s not as annoying as some things, but it sure would be nice to have someone who has some respect for a .337/.474/.567 line calling the game. Not every valuable player has to hit 40 over the wall every year. Cincy has had plenty of those in the last 17 years, but these have been the first post-season games we’ve won in that amount of time.

What to Say to Sound Smart at the Water Cooler
Johnny Cueto faced just 1 batter in game 1 of this series, which is the fewest batters faced by a starting pitcher in any MLB postseason game ever. Prior to Cueto, the record was held by Curly Odgen, who faced only 2 batters as the starter for Washington in game 7 of the 1924 World Series, also against the Giants–the New York Giants.

The two shortest post-season starts, both against the same organization (albeit in 2 different cities). If you’d like to run with this parallelism, the Senators *did* win the World Series in 1924.

Posted in Daily Briefs.
Comments Off on Votto 3-for-7 in NLDS