Due to the rain that delayed the start of the game between the New York Yankees and the Baltimore Orioles, the Reds’ game has been moved to TNT. The start time remains 9:30pm.

That was what I tweeted after Johnny Cueto pitched to the second batter of the first inning and left the mound in pain. The game, the series, and the playoffs all felt like they’d ended right then and there. The Reds’s starting rotation without any injuries for the whole season would lose their ace in the first playoff game. It wasn’t fair, and the whole season flashed before my eyes. 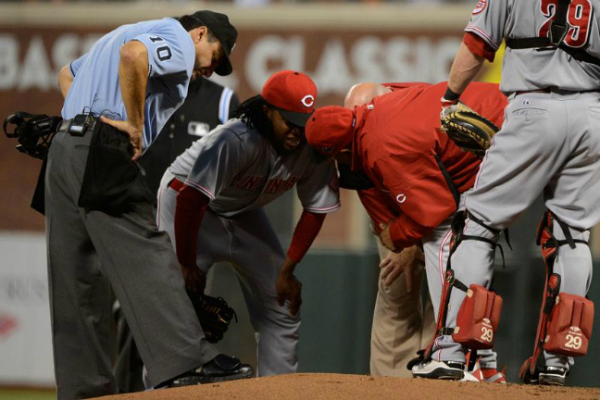 But you know who didn’t panic? The 2012 Cincinnati Reds. The last club to make the playoffs–the 2010 squad–would have crumbled. But not this one.

Manager Dusty Baker–always one cool cat–kept calm and went to work, putting in one of the finest performances of his managerial career. He didn’t panic, inserting long-man Sam LeCure into the game to finish the first inning.

But that would only get the team so far. At most, LeCure could get the team through the third. The game would turn into a bullpen game, and the Reds’ bullpen would be wrecked for the rest of the series.

There was an alternative. A 24-year-old ace pitcher himself, almost bouncing up and down in the dugout, volunteering to go in. Yeah, Mat Latos entered himself into Cincinnati Reds lore forever for his performance last night.

After an amazing, scoreless job by LeCure, Latos entered the game in the third. He warmed up as normally as he could through the second inning, and ended up providing Cincinnati 4 innings of 1-run baseball. Oh, and he saved the season.

The offense, so cold at the end of the regular season, flipped a switch, too. Similar to how everyone stepped up when Joey Votto went down, everyone knew they had to perform even better without the team’s star pitcher.

Brandon Phillips hit a two-run home run in the third inning to get the Reds on the board. And the next inning, Jay Bruce hit a solo shot for the 3-0 lead.

Latos turned it over to the bullpen in the 7th, and the three-headed closer machine for the Reds made sure that lead stood still. Sean Marshall, Jonathan Broxton, and Aroldis Chapman nailed it down. Sure, Chapman made it interesting in the 9th by allowing a run on a wild pitch. But thanks to the 2 insurance runs in the top of the 9th, the outcome was never really in doubt.

That was the most fun I’ve had watching a baseball game all season. And I can’t wait for more tonight when Bronson Arroyo takes on Madison Baumgartner at 9:30pm.