The Return of Milton

After pitching a few scoreless innings in the Hall of Fame game before it was rained out, Eric Milton has been cleared to return to the rotation and is scheduled to make a start on Saturday against Detroit.

To make room, Elizardo Ramirez will probably be the one sent back down. I guess that makes sense, but there are so many good candidates for sending to Louisville. I hope they'll all get due consideration.

Posted in Wheeling and Dealing.
Comments Off on The Return of Milton

The Closest They’ll Ever Get 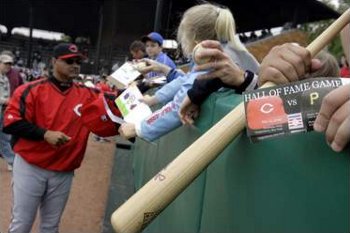 “Pirates” and “Hall of Fame” on the same ticket? Now I've seen everything!

Posted in Pretend Captions.
Comments Off on The Closest They’ll Ever Get

The Blog Buzz that Never Was

Man, it's been a long time since I've done a blog buzz, but it's hard to find the inspiration when the team's just been swept for the first time. I was all ready to take solace in trouncing the Pirates, but then tonight's game happened. It's just depressing.

Maybe I can go find a photo to make fun of or something. Hang in there guys: it won't always be this bleak. Or, even if it is, we'll get used to it.

Posted in Random Ramblings.
Comments Off on The Blog Buzz that Never Was