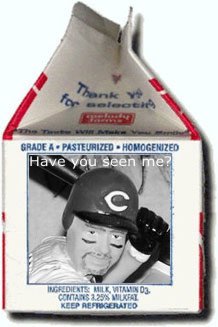 For those of you just joining us…

Jacci identified JD, Shawn, Blade, Doc Scott, and me as her suspects.

Someone's story must not hold up, because Casey is gone.

I'm really worried. You have to help Jacci find Tiny Casey. The first person to locate him and identify his kidnapper will receive a full prize package from yours truly, including an autographed copy of Covering the Bases, several matchbooks, and an autographed copy of the increasingly collectible book Funnyball.

Can You Feel It?

The wind is changing; I can just tell. The Reds will win today.

The Reds lost the game and the series to the Pittsburgh Pirates yesterday by a score of 2-7.

Cincinnati drew first blood for a change when Ryan Freel, Felipe Lopez, and Ken Griffey, Jr. each singled to start the first inning. Austin Kearns knocked a sacrifice fly to left to score Freel. Adam Dunn walked to load up the bases again, but Edwin Encarnación popped out and Brandon Phillips struck out to end the threat.

The Reds didn't put up much of a fight again until the fifth inning. Freel and Lopez drew back-to-back walks, setting up Griffey to score Freel on a single to left field. Kearns grounded into a double play and Dunn walked for the second time, putting the pressure on Encarnación, who flied out to end the inning.

In the seventh, Freel singled to reach base for the third time on the night (he would walk in the ninth to make it a total of four). After a fly out by Lopez and a HBP for Griffey, Freel got himself picked off. Even with two outs, though, Kearns reached on a fielding error and Dunn walked to, yet again, put the pressure on Encarnación. Poor kid k'd.

The loss brings the Reds' record to 23-17. They prevent the sweep this afternoon at 12:35 p.m. Dave Williams takes on Victor Santos.

You probably noticed that it was Adam Dunn manning first base last night. That was because Rich Aurilia is still on the DL and Scott Hatteberg has come down with the dreaded flu-like symptoms:

PITTSBURGH -- Flu-like symptoms have felled Scott Hatteberg, who was to start at first base tonight. The original lineup also had Lopez leading off and Brandon Phillips second.

Now that Hatteberg is out, Dunn will play first and Freel will start in left and lead off, moving Lopez back to second and Phillips to seventh in the order.

Personally, I think Javy at first would have been a better choice, but whatever.

The dreaded flu-like symptoms have hit this team many times over the last two seasons. In fact, they've caused so much missed playing time, I'm starting to think that “flu-like symptoms” is, in fact, a euphemism for one or more other conditions, such as:

This is the point in the column where usually I'd entreat the Cincinnati management to drop the fascade and just tell us if the guys are feeling too puffy to play, but now that I think about it, stick with the “flu-like symptoms.” Every relationship needs a little mystique.

Posted in Random Ramblings.
Comments Off on The Dreaded Flu-Like Symptoms