A Little Musical Love for Griffey

There's only one man to see when you want some super-positive, folksy-sounding, mildly-schmaltzy, Reds-related musical entertainment, and that's Ryan Parker. This time, his serenades honor one Mr. Ken Griffey, Jr.

May
Reds hitting coach Chris Chambliss got some attention from the local media thanks to the improvement of the offense under his tutelage. He would be fired a few months later, apparently as part of Wayne Krivsky's war on scoring runs.

The Reds went into this month close to the top of the division. They battled the Cardinals for the number 1 spot and got it. Gotta love beating the Cards.

Episode 11 of the podcast marked a change in format, as the Crack Technical Staff joined me for a weekly conversation about the team. You guys must like him, because this episode remains the single-most downloaded episode of them all.

Remember when Griffey went on the DL in the last month's recap? On May 11, he finally returned. In his first game back, he smacked a walk-off homer. 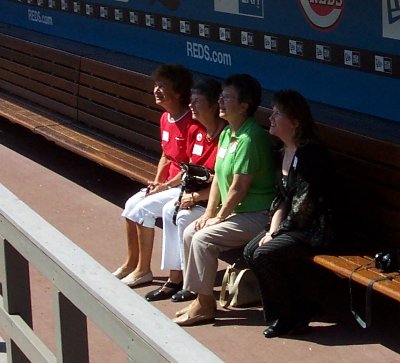 This was the month of Baseball 101, a special event for woman baseball fans, which does nothing to actually teach anything about baseball. It was only OK, but I got to meet a couple interesting people.

Tiny Casey was kidnapped! It didn't get the media coverage I thought it deserved.

Certainly the best local car ad ever was created right here in Redsland.

The Reds ended the month of May with a 29-24 record, still second in the NLC and one of only two teams above .500 in the division. Really, the Ford Commercial was the best thing going on.

The Return of Chris Reitsma?

I was poking around AJC.com, looking for news on the long-rumored Laroche-for-Gonzo-for-Melky trade, and came across this:

At the risk of spoiling the New Yearâ€™s celebration for many of you, lâ€™m going to cut to the chase and tell you that Chris Reitsma will not be returning to the Braves.

This according to the beleaguered relieverâ€™s agent, who told me Sunday that Atlanta wasnâ€™t among the dozen teams that expressed interest in Reitsma after the Braves non-tendered him last month.

Agent Mike Paolercio said six teams have made â€œlegitimate offersâ€ for Reitsma, who posted an 8.68 ERA and .362 opponentsâ€™ average in 27 appearances before the All-Star break, then went on the DL and had season-ending elbow surgery.

One of those teams is the Reds:

He said heâ€™s well into negotiations with â€œseveral teamsâ€ including Cincinnati, where Reitsma was a setup man, closer and fan favorite before being traded to Atlanta before the 2004 season.

(Yes, he was a seriously popular pitcher in Cincy, much as Dan Kolb was in Milwaukee and Bob Wickman in Cleveland. Hey, at least one of them didnâ€™t see his career fall to pieces in Atlanta.)

Though he didn't pitch well in Atlanta, he seems to have made friends there nonetheless:

While most of you never met him, let me go on record as saying Reitsma was about as decent and good a dude as Iâ€™ve ever met in 12 years covering baseball. I know that probably doesnâ€™t mean a lot to you, because, as I said, he did stink for most of his final 12 months here.

But next time he visits Turner Field, it really wouldnâ€™t hurt to give him a little polite applause. Or at least quiet indifference. At least donâ€™t roll down your window and yell obscenities at him. If you guys ever got to meet him and talk to him, youâ€™d know what I mean. Good dude.

And in other news, Brendan Harris was dealt to Tampa, for a PTNL or cash. (The PTNL is probably not Josh Hamilton.)

Reds Trade Harris to Rays for Nothing In Particular

The story on Reds.com gets right to the point:

CINCINNATI -- The Reds traded reserve infielder Brendan Harris to the Devil Rays for a player to be named later or cash on Tuesday.

Harris was designated for assignment by Cincinnati on Dec. 21, when Jeff Conine arrived in a trade with the Phillies.

Harris was acquired from the Nationals with relievers Gary Majewski and Bill Bray as part of a July 13 eight-player deal that sent Austin Kearns and Felipe Lopez to Washington.

Over 25 games in the Majors last season, including eight with the Reds, Harris batted .238. He spent most of the 2006 season in Triple-A.

One thing you can say for Krivsky: he doesn't stand stubbornly by his bad moves. No, he's always ready to make his next bad move, especially if there's a 40-something player to be had.

Posted in Wheeling and Dealing.
Comments Off on Reds Trade Harris to Rays for Nothing In Particular