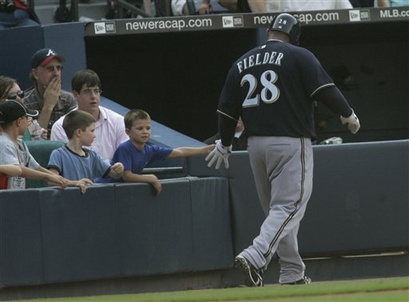 At 5’11”, 270 lbs, and 24 years old, Milwaukee Brewers’ first baseman Prince Fielder has a basal metabolic rate (BMR) of 2486.6 calories per day. That means that he needs almost 2500 calories per day just to maintain his weight after the effort of using his lungs for breathing, heart of circulating, and other metabolic processes.

To add in the fact that he’s a professional athlete and presumably very active most days of the week, you multiple his BMR by 1.725, according to the Harris Benedict Equation to determine the calories he needs to maintain his weight given his lifestyle. That brings his total 4289.385.

To put this in perspective, a cup of fresh, raw spinach contains 7 calories. A tomato has about 40. A serving of tofu has about 100 calories. Even an avocado, the unsaturated fattiest of the veggies, has only about 300, and you have to eat the whole thing.

None of that may seem relevant, until you think about how, after reading the book Skinny Bitch in the off season, Prince Fielder became a vegetarian. And it would take over 14 avocados, 10 blocks of tofu, 100 tomatoes, or 613 cups of fresh spinach per day to keep that guy at high fighting weight.

Hope no one else wanted to hit the salad bar.

The Astros beat off both the Cubs and the rain yesterday, as 4 pitchers combined to blank Chicago.

That bizarre trade for Latrell Hawkins is looking golden now. He pitched one-third of an inning for the save! One-third! That’s a whole out.

The game had two different rain delays. The first one lasted 2 hours and 45 minutes right after the 5th inning was completed. The second delay was in the bottom of the eighth and lasted only 39 minutes before the game was called.

The Astros have now won 4 in a row, while the Cubs modest 2-game winning streak was broken.

If Cincinnati were Chicago, a W flag would have flown above the ballpark after last night’s game. It might have confused folks into thinking it was an ad for the upcoming Oliver Stone movie, which would seem especially strange coming from close personal Bush friend Bob Castellini. Like I said confusing, which is kind of what the game was.

Here the Reds are, coming off a sweep from the Nationals–a terrible, crappy team if ever there was one. I mean, their GM is Jim Bowden, a guy who wasn’t good enough for Cincinnati. And into town comes the Milwaukee Brewers, a team battling for first place in the division and the wild card spot.

So naturally the Reds win.

Bronson Arroyo had his better half show up, as he pitched 6 innings and allowed only 1 run while doubling in a couple for his side. The bullpen was adequate, as Magic Man and Stormy both gave up runs, but the lead still held for Francisco Cordero to get the “easy” save.

The Reds have shown serious motivation issues, beating good teams and getting spanked by sucky ones. If only there were a way to fix that, but obviously, that’s nothing management has anything to do with.

As for the Brewers, they missed a great opportunity to beat a bad team and gain a game on the losing Cubs. But Manny Parra imploded in the 5th, allowing 4 runs and leading to a shoving match with Prince Fielder. (Note to Parra: Run away. You won’t win.)

We’ll see if that fighting helps them going forward.