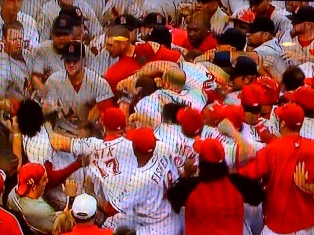 So, last night, Brandon Phillips went to the press to let them know his opinion of the St. Louis Cardinals:

Exquisite. I mean, it’s exactly what I’ve been saying since the opening series, but just beautifully put. The eloquence brings a tear to my eye.

And ain’t it the truth? Here’s an excerpt from a post here on RHM back in May:

The Cardinals don’t seem to realize what a serious problem they have. Carp getting huffy when someone shows frustration, Card bloggers saying Gomes shouldn’t flip his bat, Card commentators saying the umps should show respect to Pujols. It’s one thing to go onto the field expecting to win; it’s another thing to go onto the field expecting people to let you win. This sense of entitlement screams sick culture. If the Cards were a Fortune 500 company, they’d be on their way to hostile takeover.

And it hasn’t changed a bit since then. Carpenter was bitching at Brendan Ryan just yesterday for being a minute late getting on the field because he was back in the batting cage. How dare he make the great one wait for the likes of practicing?

And now today, as Phillips approached the plate to take his AB, Yadier Molina did the totally-non-bitchy thing and kicked his bat. Before you know it, the benches and the bullpens are cleared. In the words of a person who actually saw it:

But it erupted when Rolen went after Chris Carpenter. Several wrestling matches broke out. Johnny Cueto, the starting pitcher, could be seen kicking at someone.

Dusty Baker was in the middle of it, shouting at someone. A couple of players were in a pile on the ground. Jonny Gomes came out of it with a torn shirt.

It all ended with the manager ejected and the fans itching for more. There may be some street fights in the streets after the game. Tomorrow, we’ll think about suspensions, but tonight, we enjoy the glee that comes from smacking down a little bitch.