In brief: Votto on The Cleveland Show 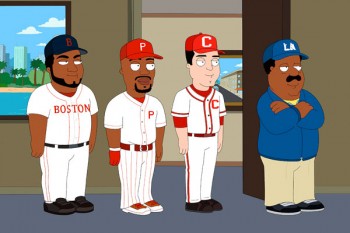 Last Game
The Reds got out to an early lead against the Indians yesterday, but let the Tribe come back to tie it in the ninth. This being spring training, they left it at that. Final score: Indians 7, Reds 7

Mat Latos started for the Reds and turned in a decent performance: 3 runs (2 earned) on 6 hits over 5.0 innings. In the first inning, Xavier Paul hit a 3-run home run and Todd Frazier hit a 2-run shot to provide the Reds that big opening inning. Chris Heisey and Denis Phipps hit solo shots in the seventh.

Considering how bad the Indians beat up on the Reds to start the spring training season this year, it was quite a show against Cleveland. I don’t know if I’d go so far as to call it The Cleveland Show, but we’ll get to that in a moment.

Next Game
Today the Reds visit the Rockies at 10:10 p.m. Bronson Arroyo will take the mound.

What to Say to Sound Smart at the Water Cooler
Other guest stars on The Cleveland Show have included KiD CuDi and Dale Earnhardt Jr.

Posted in Daily Briefs.
Comments Off on In brief: Votto on The Cleveland Show