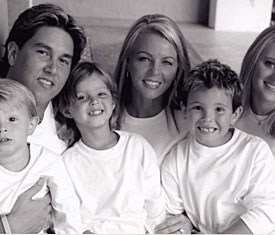 By now I'm sure you've seen the Reds'-related On the DL entry.

I'm not prepared to judge the veracity of the accusation, and I don't really have anything to add to the discussion. I'm just taking this opportunity to post this photo of Graves' wife and kids.

When I saw this back on Mother's Day last year, I thought she was too pretty for him.

Movie-Type Trick Teaches Arroyo to Believe in Himself

CINCINNATI, OH -- Last night the Reds pulled a hoax on starting pitcher Bronson Arroyo to help him gain confidence in his own abilities.

The Reds have carried three catchers this year, at least in part because of Arroyo's preference for David Ross. With the hot start that Ross has had, the Reds have had many sweet offers for him, but have been reticent to deal him lest Arroyo implode.

“We needed to make him understand that it was him providing the quality starts,” explained manager Jerry Narron. “It didn't matter who he was pitching to.”

So, at Great American Ball Park he secretly replaced catcher David Ross with Jason LaRue to see if Arroyo could tell the difference. The result: seven innings of one-run baseball.

“I guess I had it in me all the time,” said Arroyo. “No matter who my catcher is.”

Are there plans to cut off that insipid hair while he sleeps?

“Not saying,” said Narron, hiding a blond wig behind his back.

Posted in Fake News Stories.
Comments Off on Movie-Type Trick Teaches Arroyo to Believe in Himself

You *CAN* Steal First

According to tonight's Chris' Clubhouse, the Fox Sports Net pre-game feature in which Chris Welch explains some aspect of the game, last night Adam Dunn walked on three balls when the umpire apparently lost count of the count.

If only somebody could have taught Tony Womack that trick.

It's nice that Chris had something to talk about. With the Reds' hot start and FSN picking up some extra games, he's been struggling for content. A couple weeks ago he spent a few consecutive Clubhouses talking about how the average height, weight, and age of players has changed over the years.

The Reds took out their losing-streak frustrations on the Brewers last night with a 15-5 win at Great American Ball Park.

Bronson Arroyo pitched the first seven innings of the game and allowed just one run (earned) on six hits and zero walks.

If I were in the possession of either mettle, I'd be dreading the return of Kent Mercker.

The Reds scored in four separate innings and kept piling on the runs long past the point it was becoming embarrassing. You can't blame them, though; we know from experience that no lead is insurmountable.

Ken Griffey Jr, Austin Kearns, and Adam Dunn each provided a home run and combined for eight RBI. David Ross went 2-for-5 and provided four RBI all by himself. Every non-pitching starter had a hit and they only left seven runners on.

The win brings the Reds' record to 26-19. They continue the series with the Brewers tonight as Elizardo Ramirez faces off against Dana Eveland at 7:10 p.m.