The uniform jersey number 13 worn from 1970 through 1988 by Cincinnati Reds shortstop Dave Concepcion will be retired in ceremonies at Great American Ball Park prior to the Saturday, July 28 game against the Chicago Cubs.

At its meeting last week, the board of directors of the Reds Hall of Fame and Museum voted unanimously to retire the uniform number of the Venezuelan native. Each fan attending the 7:10 p.m. game will receive a commemorative replica of a painting that will be presented to Concepcion that day.

“He was the best shortstop of his era and certainly one of the greatest in the history of our storied franchise,” said Reds president and chief executive officer Bob Castellini. “Number 13 deserves to hang next to the uniform jerseys of Bench and Morgan and Perez.”

As the starting shortstop on the Big Red Machine, Concepcion was teammates with Bench, Morgan and Perez under manager Anderson on a club that from 1970-78 went 863-586 (.596) and won five National League West Division titles, four pennants and two World Series championships. The '75 and '76 Reds combined to go 210-114 (.629) and became the National League's first franchise in 54 years to win consecutive World Series titles. Concepcion was named team captain in 1973.

Concepcion, 58, was a 9-time National League All-Star, fourth-most in club history (Bench 14, Rose 13, Larkin 12), and his 5 Rawlings Gold Glove Awards are second only to Bench's 9 Gold Gloves. He was the Most Valuable Player of the 1982 All-Star Game, 3 times was a The Sporting News All-Star and twice won Louisville Slugger Silver Slugger Awards. He was voted the Reds' MVP in 1981.

“By virtue of his 19-year career with the Reds, a claim to being the best shortstop of his era and his overall place in Reds history, Dave Concepcion richly deserves this honor, one that rightfully is reserved for those very few players whose careers truly represent extraordinary accomplishment,” said Greg Rhodes, executive director of the Reds Hall of Fame and Museum.

Concepcion's 13 will be displayed alongside the others below the press box behind home plate at Great American Ball Park. 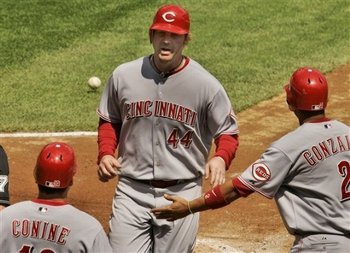 Reds versus Pirates: The Wrath of Salmon

Things are changing, friends. Brad Salmon's in the hiz-owse!

Here's the line-ups, thanks C. Trent:

The Cincinnati Reds today acquired RHP Marcus McBeth as part of yesterday's deal that sent OF Chris Denorfia to the Oakland Athletics in exchange for 2 players to be named later and cash considerations.

McBeth, 26, is scheduled to report to the Reds' Class AAA affiliate in Louisville tomorrow. He is the 48th player acquired by executive vice president and general manager Wayne Krivsky since he was hired on February 8, 2006.

I'm still hardly super-psyched to be saying goodbye to Denorfia for this fella, but I hope that once he makes it up to the team that he'll change my mind. In the meantime, it's just so exciting to have something new to talk about.

And Cormier DFA'd and Salmon called up.

“Salmon has pitched well and we think he deserves the promotion,” Krivsky said.

Best of luck to you, young Brad Salmon. We're counting on you to make it all better. But no pressure or anything.