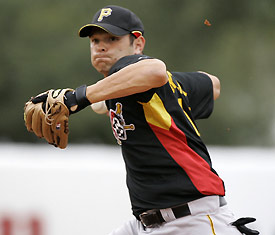 News broke Saturday concerning Pirates 2nd baseman Freddy Sanchez that brings dread to any fans heart. Sanchez will be flying to Alabama to be examined by Dr. James Andrews.

Sanchez had shoulder surgery in September 2007, and this is supposedly unrelated. But judging by these quotes that Pat rounded up, it doesn’t sound good.

Didja hear about all those Cubs trashing their manager’s car as a “prank”? It was nearly Cartman-esque, but they did get him a new one to replace it, so it’s all good. While doing a cursory search for a photo, I found this shot of Cubs manager Lou Piniella and wanted to share.

So, now this post is officially NLC-related, which is my security blanket because I don’t know whether people care about these “crap going on in the blogger’s life” posts. I feel like I’ve got to hedge my bets.

The Google Page Rank here on RHM has been all over the place the last few days. If you don’t have the Google toolbar installed with the PageRank displayed, you might not be familiar, but it’s just a rank of a page based on a proprietary set of factors, such as inbound links. We’d been happily hanging around at a 6 for the last few months, which had me overjoyed. So you can imagine how the bottom fell out of my stomach when I loaded the site on Thursday to see that number cut in half.

The CTS and I did some research to show that this happens to people all the time as Google updates their indexes to discount sites that are trying to game them, and that the ranks usually come back over time. The research also told us that we ought to clean up broken links in our archives, which we have a lot of thanks to a less-than-perfectly-smooth conversion to WordPress a couple months ago.

Since then I’ve loaded the site to see the PageRank at every number between 3 and 6 inclusive. It’s still disconcerting, but at least I’m not someone who depends on their PageRank for their livelihood. It’s just a matter of arrogance, really, and an indication of our effectiveness in actually making “Javier Valentí­n” a household name.

Meanwhile, I’m hitting some information sessions about MBAs at nearby schools. If I were to go that route, I wouldn’t even be starting until the end of the year, but it’s still sorta exciting to think what a very executive tone the posts on RHM could take before too long.

On the horizon are Opening Day, our big spring-break trip to Houston, and Red Hot Mama’s third blog day. Lots to look forward to, but its keeping me busy too. Which is why you’re subjected to a post about a stupid Cubs prank and the distractions in my life written as I watch a rerun of Saturday Night Live and nudged a little, time-wise, to prevent the site from having two consecutive days without posts.

Thanks for hanging in there, and enjoy the photo.