Eight games into the pretend 1977 season and the Reds are in the middle of the pack. Fourth place and 4-4, which is total bullshit. Have you seen this friggin lineup??

Of course, you have to question any system that allows the Royals to lead the AL and the Expos to lead the NL. I know it was a long time ago, but geez.

Here’s the pretend standings for both leagues as of today: 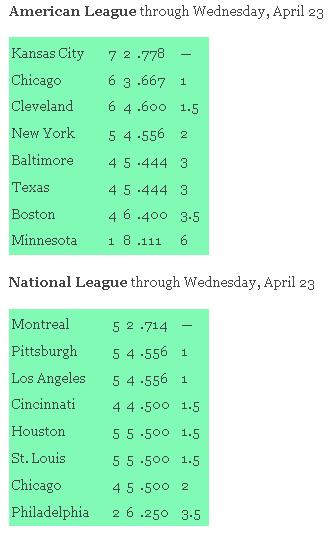 And to give you a frame of reference, here’s how the actual NL in 1977 finished the season:

For the moment, I’ll call it a small sample size anomaly.

To read all about this exercise in nostalgic fantasy, check out Play that Funky Baseball.

Posted in Random Ramblings.
Comments Off on Pretend 1977 Season Update

Before you ignore this post as just another press release, take a moment to review the nominees. This is no regular Hall of Fame to include Bill Murray, Rosie O’Donnell, and Casey from “Casey at the Bat.” That’s taking the word “legend” very literally.

New York, NY – Foley’s NY Pub & Restaurant (18 W. 33rd St.) today announced the nominations for 2010 induction into the Irish American Baseball Hall of Fame (IABHOF). Voters include past inductees into the IABHOF and a panel of baseball historians. Results will be announced in April 2010.

HALL OF FAMERS and LEGENDS

“It’s a strong and deserving class of nominees for the Irish American Baseball Hall of Fame this year. All of these men — and one woman — have made significant contributions to the game,” said Shaun Clancy, owner of Foley’s, which features one of the country’s most extensive public displays of baseball memorabilia outside of Cooperstown.

With the blessing of the Baseball Hall of Fame, Foley’s, a popular destination among baseball players, executives, umpires and fans, created the Irish American Baseball Hall of Fame to recognize players, managers, executives, journalists, and entertainers of Irish descent. Inductees are chosen based on a combination of factors, including impact on the game, popularity on and off the field, contributions to society, connections to the Irish community, and, of course, ancestry.

The game of baseball has long welcomed immigrants from its earliest days, when an estimated 30 percent of players claimed Irish heritage. Many of the game’s biggest stars at the turn of the 20th century were Irish immigrants or their descendants, including Michael “King” Kelly, Roger Connor (the home run king before Babe Ruth), Eddie Collins, and NY Giants manager John McGraw. Today, major league teams regularly sign players born in Latin America, Japan, Canada, and elsewhere.

Shaun Clancy, an amateur baseball historian, created the Hall after learning about the rich heritage of Irish Americans in the sport dating from its infancy – a legacy that has been overshadowed in recent years by other ethnicities. He decided to celebrate his roots and those who helped make the game great by creating a shrine to Irish Americans in baseball in 2008.