First time in Hohokam Park…for us and the Reds. It’s definitely got the Wrigley Field vibe, including the relative oldness of the park. 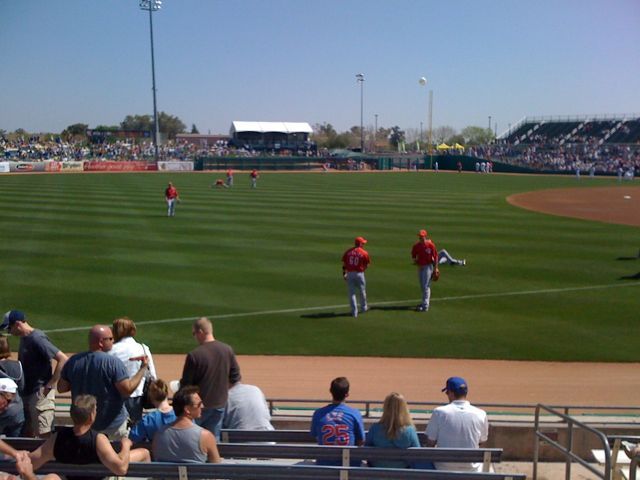 Aroldis Chapman is the Cuban defector that the Cincinnati Reds signed and no one else did.

Much has been written about him, as would be expected when you have a left-handed starter who routinely touches 100. The list of left-handers with that kind of speed pretty much starts and ends with Randy Johnson. There’s lots of buzz, but the Reds seem to be handling his promotion to the majors with due consideration.

Here are a couple videos from game 7 against the Dodgers. The first clip is a wide view, showing Chapman executing his fairly smooth delivery and delivering all the way to the plate.

One thing that I found most impressive about Chapman was how long his stride is. At 6 feet, 5 inches, I guess it shouldn’t be surprising that he’d have a long step from the rubber. But to see his foot reach all the way to the edge of the stepping spot was pretty awesome. Not as awesome as him mowing down Dodgers hitters, but close.

As much as I would love him to develop in the minors and became awesome for the Reds, I’m also terrified he’ll get injured before ever making it to the show. I’d hate to be the Reds brain trust for this decision.

People crowded underneath the stands behind home plate–yours truly included–to get an up-close look at one of those rarest of wonders: a left-hander with a 100 mile per hour fastball. Unfortunately, the bare-bones Dodgers spring training facility had no pitch-speed on the scoreboard, and I had left my radar gun unpurchased at the store. So I could only guess as to the speed of Chapman’s pitches. He threw hard and fast, though.

Chapman’s off-speed stuff was fast, too. And he had all of the hitters swinging late. He ended up striking out 2 and allowing no runs over 2 innings.

Jonny Gomes provided the offense for the Reds, hitting a two-run shot in the 4th. That would have been all Cincy needed, if not for a late rally by the Dodgers in the 9th. Thankfully, Chris Heisey had hit a solo shot in the 6th, insuring the Reds lead and keeping pace with Gomes in the race for left field.