Touring Where Pirates are Made 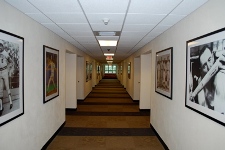 Pat Lackey of the Pittsburgh Pirates blog Where Have You Gone, Andy Van Slyke? recently took a week-long trip to Florida to check out Spring Training in the Grapefruit League. He also received an unexpected opportunity to tour Pirate City.

Pirate City is a facility that the Pirates opened back in February of 2009. It serves as the home for the Pirates Florida operations, and includes dorm rooms for players and staff.

According to Lackey, the Pirates house all of their minor-league players on-site during Spring Training. Apparently, the Detroit Tigers are the only other team to do such a thing. I know that the Reds don’t.

It sounds like the Pirates have done a great job of incorporating the history of the team into the complex, with pictures of past greats adorning the hallways. Another nice touch is that each of the dorm rooms is dedicated to a particular Pirate All Star.

Lackey also got a meet-and-greet with Pirates GM Neal Huntington, and got to see many of the conference rooms and player areas. There are more pictures and details about how Pirate City is used here.

Posted in NL Central, Pittsburgh Pirates, Spring Training.
Comments Off on Touring Where Pirates are Made

The Daily Brief: Bad-royo Strikes Back

Last Game
The Cincinnati Reds lost to the Colorado Rockies yesterday, dropping their record to 8-9 on the Spring. Bronson Arroyo was the loser, in more ways than one, but Aroldis Chapman provided the scare, being taken out early with a stiff lower back.

Next Game
The Reds have their only off-day of Spring Training today. They host the San Francisco Giants at 4:05pm EDT on Wednesday the 24th. If you can’t let a day go by without Reds baseball, you may need some counseling. However, if you’re in denial, you can catch the MLB Network’s 30 Clubs in 30 Days episode about the Reds at 10pm.

Time to Upgrade to HD
Looks like the RHM household chose the right year to upgrade to HD satellite, which is happening Wednesday. This year, FSN Ohio will be simulcasting all 145 televised Reds games in HD. This will be our first year watching baseball in HD, and I can’t wait. Especially after seeing the wretched video quality coming from the standard feeds offered by MLB Network and FSN Ohio the last couple days.

What to Say to Sound Smart at the Water Cooler
Chris Heisey, Zack Cozart, and Todd Frazier were all cut from big league camp and will have to pray for injuries to get called up during the season.