For twenty-six years before 9/11 was in the collective consciousness as a horrible tragedy, it was known to baseball buffs as the date when Pete Rose broke the hit record held till then by Ty Cobb. 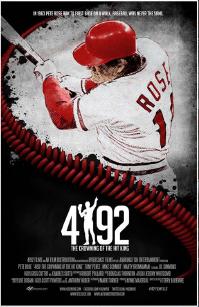 There’s a 2-hour production about it on FSOhio on Tuesday called “4192 – The Crowning of the Hit King.”

On a warm September evening in 1985, before a sell-out crowd, Pete Rose stood on the edge of history. With one swing he would collect more hits than anyone in the history of the game he loved. 4192: The Crowning of the Hit King is a love letter to baseball that highlights the playing career of one of the games most honored and controversial stars.

But this story begins long before the legendary sprint to first on a walk in 1963. It begins in a neighborhood off the banks of the Ohio River, where a boy, with limited natural athletic ability, tosses a ball with his father, whose mantra is to win at all costs. The boy was Pete Rose and his awe-inspiring career spanned more than two decades and brought numerous individual awards as well as three World Series titles. But at it’s heart, beyond the awards and statistics, this is a baseball story about a man who loved to play the game and what drove him to chase a record that had been deemed unbreakable.

The program premiers Tuesday on FSOhio at 10:30 p.m. or right after the Reds risk elimination at the hands of the Astros.

Posted in Random Ramblings.
Comments Off on The Record Breaking Hit