The unthinkable has happened. Mat Latos, the off-season acquisition that cost so much, has started a game, yet the Cincinnati Reds lost.

Not only that, but their chance at an undefeated Spring Training–and the coveted Cactus Cup trophy–has been crushed. The regular season may as well be forfeited. And Joey Votto should be traded away for nothing.

Now that that nonsense about taking Spring Training results at all seriously is out of the way, let’s look at the game. Latos did start in the game against the Mariners, pitching two scoreless innings. Like many elite pitchers, he was a little off in the first, allowing two hits and a walk, but his second inning was perfect.

The pitchers that followed him, not so much. Brett Tomko fared the worst, allowing 5 runs in his inning. Two other relievers who are long-shots for making the Opening Day roster–Nick Christiani and Andrew Brackman–also allowed runs.

The offense continued to produce runs, though. Denis Phipps hit a three-run home run, and Donald Lutz added a solo shot. But it wasn’t enough to give the Reds a meaningless win. But it did give the players practice.

The next game will be back at Goodyear, when the Reds host the San Diego Padres at 3:05pm EST. Bronson Arroyo will make his Spring debut.

Bat to the head! 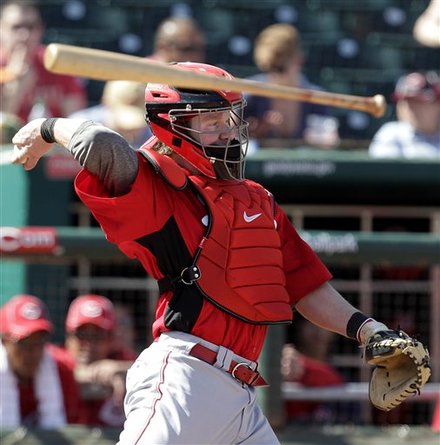 Opposing teams are so scared of Ryan Hanigan’s throwing arm that they’ve taken to alternative strategies to help their running game.
Posted in Cincinnati Reds, NL Central, Pretend Captions, Spring Training.
Comments Off on Bat to the head!