Madson tears elbow ligament and is out for the year

Apparently, while in the process of punching Reds fans in the gut, closer Ryan Madson tore his elbow ligament.

Following an examination in Cincinnati Saturday morning, the club said that Madson’s elbow ligament had torn off of the bone. He will need season-ending Tommy John surgery.

“Off of the bone”? Eww. The only time that’s a description that can be used favorably is when referring to slow-roasted barbecue. And this definitely has nothing to do with that.

This hurts. This hurts a lot.

General manager Walt Jocketty tried to be positive about it.

“We told the team and said to stay positive. We have good alternatives we can turn to. Others clubs have done it in the past. I did it in St. Louis. When Izzy went down, Wainwright stepped in and we won the World Series. Madson got the job because Lidge got hurt [with the Phillies]. Is it the ideal thing? No. But you have to stay positive.”

That will be easier said than done. Now the team will have to determine how to shuffle bullpen roles, with Sean Marshall the leading contender to take over closing duties. We’ll have to stay tuned to see how this affects Aroldis Chapman’s conversion to starting.

No matter what, though, this is will be a hard blow to overcome.

Posted in Cincinnati Reds, NL Central, Spring Training, Wheeling and Dealing.
Comments Off on Madson tears elbow ligament and is out for the year 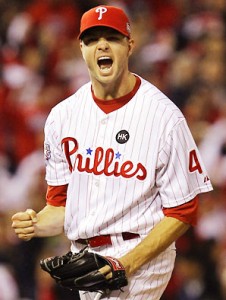 The only proper response to a Cincinnati Reds fan upon hearing this news is of the four-letter variety.

Yes, Ryan Madson, who has yet to appear in a Spring Training game due to a sore elbow, had a setback.

Madson, who’s been dealing with a sore elbow all spring, had a setback on Thursday. With Opening Day 12 days away, it’s unlikely that Madson will be ready by then — no matter how minor the setback.

There’s now way of looking at this as positive. The Reds’ shiny new closer will not be ready on Opening Day, and there’s now the possibility that he won’t be available this whole year.

I’m hoping for something that he can recover from quickly, but right now, I’m not too confident.