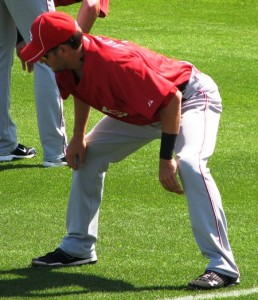 For the first baseball game after the All Star break, the Cincinnati Reds started their first series at home in more than two weeks and took on the St. Louis Cardinals. After that wretchedly late West Coast trip before the break, it was really nice to have baseball back.

A decent pitching duel seemed possible, with Adam Wainwright going against Mat Latos. Unfortunately, Mr. April showed up for the Reds. Latos allowed 2 runs, 4 hits, 3 walks, and struck out 5. After 5 innings, his pitch count was at 97, and he was done.

Wainwright was better than he’s been in the past, but he’s clearly not fully recovered from his Tommy John surgery. Not everybody returns to 100% from that, and his inconsistent year, coupled with Chris Carpenter out for the year and Jaime Garcia out for who knows how long, that can’t have the Cardinals feeling too good about their rotation.

The wagon-maker was strong early, allowing just 1 run and 2 hits over the first six innings, but his wheels fell off in the 7th. Brandon Phillips and Jay Bruce both singled to start the inning. Ryan Ludwick bunted both runners over first the first out–a play I’m convinced was a stupid waste of an out. Then Ryan Hanigan swung at the first pitch he saw and beat out a poor underhand toss from the first baseman to Wainwright covering at first base. Both Phillips and Bruce scored on the play, giving the Reds a 1-run lead. Zack Cozart finished the scoring in the inning with a sacrifice fly.

Alfredo Simon was the pitching savior for the Reds, pitching two scoreless innings and allowing the offense time to come back. Jose Arredondo struggled to get through the 8th, having to be relieved by Sean Marshall, but the two got the job done. And Aroldis Chapman closed it out for his 12th save. Sadly, there were no somersaults afterwards.

Today, the Reds and Cardinals will go at it again, with Cincinnati sending out Mike Leake to face off against former Red Kyle Lohse. The first pitch is at 4:05pm EDT.