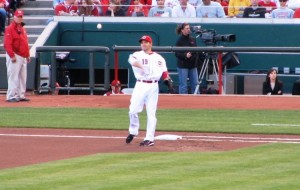 
According to @JinAZReds, who just knows about this stuff, the fastest inside-the-park home run in Major League history took 14.02 seconds. Looks like Billy Hamilton, who isn’t quite Major League yet, just did one in 13.7. If he can get on base, this guy’s going to be pretty fun to watch with the Reds.
Posted in Random Ramblings.
Comments Off on Hamilton’s inside-the-park homer

The brooms were out as the Reds completed the sweep of the Cardinals last night on ESPN Sunday Night Baseball (Presented by Taco Bell).

Johnny Cueto would have taken the mound, but was suffering from a blister. How he got a blister over the All-Star Break, I don’t know, but it wasn’t too big a deal since everyone else was rested. Homer Bailey took his place and totally rocked it. He pitched 8.0 innings, allowing 2 runs (1 earned) on 9 hits and 2 walks. He even got the win, since the Reds took the lead in the bottom of the last inning he pitched.

Aroldis Chapman struck out the last three guys for the save. It was the third game in a row that he pitched, so I imagine we won’t see him in tonight’s game.

For the offense, Chris Heisey went 3-for-4 and Joey Votto snapped his 2-game hitless streak with a 2-for-3 night, plus a walk. Brandon Phillips, Devin Mesoraco, and even Homer Bailey each contributed a hit.

It was, however, Scott Rolen’s night to shine. With 2 outs in the bottom of the eighth and runners on second and third, the Cardinals intentionally walked Ryan Ludwick to load the bases and get to Rolen. He made them pay with a line-drive single to right field that won the game.

The win brings the Reds record to 80-58 and once again gives them sole possession of first place in the NLC. Tonight they host the Diamondbacks who are fresh off being swept by the Cubs. Bronson Arroyo (4-5, 3.73 ERA) faces off against Wade Miley (9-5, 3.04 ERA). First pitch at 7:10 p.m.

Posted in Game Wrap.
Comments Off on Game 88: Reds 4, Cardinals 2

Last Game
The Reds beat the Cardinals last night to sweep the 3-game series in Cincinnati: Reds 4, Cardinals 2. It’s the Reds’ sixth win in a row, and that’s what it took to wrest first place in the NLC back from the Pirates. The Reds are now in sole possession of first place in the division by 1.0 games.

Next Game
Tonight, the Reds host the Diamondbacks at 7:10 p.m. at Great American Ball Park. Bronson Arroyo (4-5, 3.73 ERA) will defend against All-Star Wade Miley (9-5, 3.04 ERA). This could be a rough match-up for Arroyo, but he’s also coming off a great outing in San Diego.

The Other End of the Spectrum
With all the jockeying for the first three positions between the Reds, Pirates, and Cardinals, it can be easy to forget about the rest of the NLC, but the Cubs have recently pulled themselves out of last place. They’ve gone 12-4 in their last 16, which has brought their overall record to 36-52 and 3.5 games ahead of the Astros.

Their most recent accomplishment is a 3-game sweep of the Diamondbacks, which, as you may remember from the last section, is the team coming to visit the Reds tonight.

What to Say to Sound Smart at the Water Cooler
The Reds have had 6-game winnings streaks twice this season, most recently June 12-June 16. If they win tonight, though, the 7-game win streak will be the highest of the season.