Joey Votto has a bum knee

In the middle of Saturday’s game against the San Francisco Giants, Cincinnati Reds first baseman Joey Votto left the game after jogging out a grounder. Apparently, he’s suffering from inflammation in his left knee that he suffered when sliding into third base on Friday night.

“Today I tried to play through it,” he said. “It started acting up. There is some inflammation in my knee.”

Votto is not in the lineup for today’s game against the Giants, but Votto wasn’t concerned about the inury.

“I don’t see why this should linger. There’s nothing structural. It happens sliding sometimes, then today — with the short turnaround — it lingered. I think I’ll be fine.”

In Votto’s place will be Miguel Cairo. Todd Frazier, the team’s third best hitter this year, would be a better choice, but it’s not one I can see manager Dusty Baker make. Hopefully, Votto will be out only a couple games.

Posted in Cincinnati Reds, NL Central.
Comments Off on Joey Votto has a bum knee 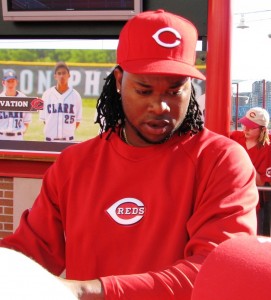 It’s been long known that Cincinnati Reds manager Dusty Baker has no love lost for former St. Louis Cardinals manager Tony LaRussa. With today’s announcement of the 2012 All Star roster, the Reds and Dusty are angry again.

Johnny Cueto and Brandon Phillips were not selected for the team, leaving many to believe it’s leftover bad feelings from the 2010 Cardinals-Reds brawl. Both Cueto and Phillips were primary players involved, and LaRussa, who gets to pick players thanks to winning the National League pennant last year, picked neither.

“I’m happy for the guys who made it big time, especially for Chapman,” Baker said. “You figured that Joey would make it. We knew Jay had an outside chance. You also figured that Johnny Cueto and Brandon Phillips had a great chance. I don’t understand that one.

“A snub like that looks bad. Johnny and Brandon were at the center of skirmish between us and the Cardinals. Some of Cardinals who aren’t there anymore are making some of the selections.”

Baker knew the media would play up his comments.

“Maybe they should,” he said. 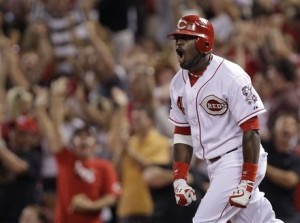 Cueto is 5th in the league in ERA, 2.26, and leads the league over the last two years. Phillips is batting .288 with 10 home runs and has a lengthy highlight reel.

It wasn’t only Baker who was upset. Votto, who was voted in for the first time, wasn’t happy either.

“It’s kind of difficult to be overly happy today, considering the two guys I thought were shoo-ins aren’t going to be on the team,” he said. “That’s frustrating. I knew I was going to be an All-Star. I was hoping those two guys, the five of us, would go to Kansas City. As much as I don’t want to get into pissing contest right now, as happy as I am for myself and Jay, I’m disappointed for the two guys who are very, very meaningful to this first-place ballclub.”

“I thought the way I pitched this year, I’d have a chance to go to the All-Star Game. I don’t know what happened. I don’t if know the manager of All-Star Game is pissed at me because I went out with one of his girlfriends.”

I’m surprised Cueto didn’t make fun of LaRussa for his DUI, but I like the insult.

Before the roster was announced, most people were wondering if Cueto would start the game–he can’t because of when his spot in the rotation falls–but to not be included is quite a surprise.