As was discussed here leading up to the non-waiver trading deadline, the Cincinnati Reds traded for Kansas City Royals’ closer Jonathan Broxton. The team has now made it official.

The team made several corresponding moves. Bill Bray was placed on the disabled list with a back injury. With a 5.19 ERA in just 8 2/3 innings this season, he could be one of those guys placed on the DL for a case of inflated ERA. Regardless, Broxton is clearly better than Bray.

Todd Redmond was called up to take Bray’s spot. This was likely to have happened without the trading deadline, considering how over-worked the bullpen has been the last couple games. Broxton will not arrive until tomorrow, so I would expect Redmond to be in the majors for one day. Again. I think this will be his third time to have that happen.

The final move was to designate Andrew Brackman for assignment. This move wasn’t necessary to make room for Broxton since one of the guys he was traded for–I believe Joseph–was on the 40 man roster. Trading him opens room for Broxton. However, with catcher Devin Mesoraco facing a suspension and Ryan Hanigan being the only catcher on the 40-man, I imagine this is a pre-emptive step to make room when backup catcher extraordinaire Corky Miller needs to be called up.

A flurry of transactions at the deadline, but just the one trade. It’s surprising to see the Reds strengthen an area that’s already so strong, but there’s always room for improvement. As mentioned, Broxton is better than Bray, and he’s arguably better than Logan Ondrusek and Jose Arredondo.

The price for a 2-month rental seems high, but now the Reds have 3 guys with closer experience: Broxton, Aroldis Chapman, and Sean Marshall. It may be unlikely, but in the back of my mind, I can’t help but wonder if this move might strengthen the starting rotation. Does this allow Chapman to move back into the starting rotation?

UPDATE 4:06 p.m.
Isn’t Mark Serrano a font of information? Now he’s congratulating Donnie Joseph. Joseph is a left-handed pitcher who, until moments ago, was in the AAA Louisville organization.
*******************
UPDATE 3:53 p.m.
Mark Serrano, minor leaguer in the Reds organization, tweeted congratulations to Juan Carlos Sulbaranon getting traded to the Royals.

Has 23 saves and 35 Ks as the closer for the Royals. If he’s not a piece for the next trade (in the next 13 minutes!!) will he take over the role from Chapman?
*******************
Ken Rosenthal is reporting that the Cincinnati Reds have acquired Jonathan Broxton from the Kansas City Royals. Broxton is a right-handed relief pitcher with a 1-2 record and a 2.27 ERA over 35.2 innings pitched with the Royals this season.

It’s sort of a mystifying move, since the bullpen is already a little crowded, so there’s speculation that he’s part of a trade for someone else or that someone else from the bullpen may be soon to be announced in a deal. It’s not yet reported what the Reds are giving up for Broxton.

Posted in Wheeling and Dealing.
Comments Off on Breaking News: Reds acquire Broxton

Reds at the Trade Deadline

Blog posts are not the ideal medium to talk about trade rumors. They come and go so fast that you really need Twitter for that. But there are a few trade considerations that are worth mentioning in the relatively permanent chronicles of blogging:

Drew Stubbs is making things difficult
For a long time the team has been saying it needs a lead-off guy. And since Dusty Baker was never going to give Ryan Hannigan that chance, it seemed to be a good thing to be looking for. Then, someone realized that they forgot to turn the StubbsBot back on after a routine cleaning, and he came tearing back into the picture, getting himself named Player of the Week last week.

Stubbs is streaky as hell, but no one in this game is perfectly consistent. The Reds might think he’s about to trend downward again and want to find someone on the upswing, or they might want to ride him as long as they can.

The three guys that the Reds were rumored to be talking about don’t seem to be working out anyway: Shane Victorino appears to be going to the Dodgers and talks seem to have ended over Juan Pierre. Meanwhile, the Twins are asking more than the Reds are willing to pay for Denard Span. This morning I’ve seen Lyle Overbay’s name mentioned. He was DFA’d yesterday and could add some depth to the bench. 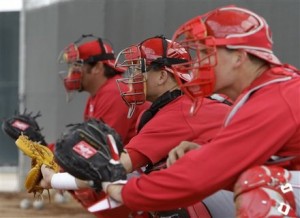 The catching situation
No one’s talking catchers, so I’m coming out of left-field here, but the potential suspension of Devin Mesoraco has highlighted a weakness in the Reds’ organization. Not only do they not have an emergency third catcher to speak of, but they only have the two catchers in AAA Louisville. Even though the backstop has not been a problem this season, it might be smart for the Reds to get someone to throw in a minor league catcher into any deals they do make, just to have a body available.

Rotation depth
A few weeks ago, someone sent me an email asking if I thought the Reds would be in the running for Cole Hamels’ services. My first inclination was to think that was about the stupidest thing I’d ever heard. Who would need an expensive starter when you’ve already got such awesomness toeing the rubber each day?

But then I thought about how the fact that the starters have been so good has made the lack of depth in the starting pitching less noticeable. If a starter goes down, I’m not sure who’s ready to jump in at this point. Someone, surely, but someone good enough to keep the team rolling along? The rumor I’ve seen today is that the Reds might be looking at Matt Garza from the Cubs.

To me, the most interesting story in the arena of trading pitchers doesn’t involve the Reds at all: the Cubs are trying to unload Ryan Dempster. I have a distaste for Dempster: not only did he suck for the Reds and then suddenly was awesome for the Cubs, he looks like the mean principal from Ferris Bueller’s Day Off.

In spite of that, though, he’d gotten quite a following in Chicago until he started getting really picky about where he’d let the Cubs trade him. Basically, it’s the Cubs or the Dodgers or nothing. Why someone would be so insistent on playing for the Cubs I don’t know, but it surely is dramatic.

Check out the #TradeDeadline and #Reds hashtags on Twitter for breaking news. I also recommend the #HugWatch thread for all the reports of players hugging in the dugout and the conclusions watchers are jumping to about where they might be traded to.

It was the kind of shelling the Reds haven’t been the victim of in a long, long time. The Padres put their runs on the board so early that the optimistic among us kept thinking the Reds might come back, but ultimately we all ended up feeling kind of sheepish after getting nothing in return for all our hoping.

Bill Bray did well with his chance, and didn’t allow any hits in his 2.0 innings. He did, however, walk 3 guys. Walks were a major plot thread in the story arc of pitching suckitude, with all the Reds’ pitchers combining for 11 walks. That’s not only the season high, it beats out the previous season high of 7 by 36%.

Jose Arredondo escaped the bases on balls bug in his 2.0 innings but did allow another run (earned) on 2 hits. Logan Ondrusek was back to walking guys in the ninth.

It looked so good for the Reds at the beginning. They drew first blood, putting 3 on the board in the bottom of the first when Jay Bruce doubled, Scott Rolen walked, and Ryan Ludwick knocked both of them in. All of that after Drew Stubbs had already hit a solo shot to right field. You get the feeling Stubbs doesn’t want to be traded.

Bruce hit his 21st home run of the season in the bottom of the third, again, reigniting the hope of the fans. But the only other scoring would turn out to be Rolen knocking in Stubbs in a fifth inning rally that didn’t end up rallying very much.

The loss brings the Reds’ record to 61-41. They continue to lead the NLC by 3 games. It just feels worse than that thanks to the sudden shift from the seemingly effortless victories to painful struggles. The series against the Padres continues tonight at 7:10 p.m. Homer Bailey (RHP, 9-6, 3.53 ERA) takes on Jason Marquis (RHP, 4-5, 3.48 ERA).

Last Game
You know the Reds don’t do anything half-way. So when it was time to break their 10-game winning streak, they left no doubt about it and lost to the Padres 11-5.

Mesoraco Could Face Suspension
Besides the blow-out, the other big story last night was Devin Mesoraco giving home plate umpire Chad Fairchild an earful and getting ejected from the game. Early in the rant, Fairchild walked into Mesoraco’s frantically gesticulating arm, and suddenly it’s a whole “you can’t touch the umpire” thing. If it had just ended there, maybe nothing would have come of it, but after that, Mesoraco sure seemed to be trying to touch the umpire in a strangling sort of way.

I’ve made no secret of my distaste for umpires. Not to say there aren’t good umpires out there, but the system lacks checks and balances and includes no apparent consequences when umpires mess up. It sets up the umpires like some sort of emperor, and a policy that says their flesh is too holy to be touched by mere mortals just reinforces that.

But the Divine Right of Umpires is not what’s top-of-mind for the Reds right now: if Mesoraco is suspended, they have only the one catcher. Even AAA is light on catchers, and neither of the two in Louisville are on the 40-man roster. So room would have to be made for someone to be called up. John Fay points out that the only active players who have options are Todd Frazier and Chris Heisey.

How the Reds proceed will probably depend on how long the suspension is. If it’s one game, maybe they don’t worry about it and just put Frazier in to catch if something happens to Ryan Hannigan. If it’s going to much more than that, it would be less of a waste to option a guy, since whoever gets options would have to stay in the minors for 10 days. There are still a few hours left: maybe the Reds could trade for a catcher.

What to Say to Sound Smart at the Water Cooler
In 2002, Joey Votto played 7 games at catcher with the Sarasota Reds. He had 3 passed balls and caught 22% of stealing runners.