This afternoon, the MLB Network announced that Cincinnati Reds center fielder Drew Stubbs had won the National League Player of the Week award for July 23 – July 29. He shares it with Carlos Gomez of the Milwaukee Brewers.

Stubbs, who helped lead the Reds to a 6-0 mark last week, hit .370 (10-for-27) and tied with Gomez for the N.L. lead in RBI (10) and stolen bases (3). The eighth overall selection in the 2006 First-Year Player Draft ranked second in the N.L. with nine runs scored and was tied for second in hits while finishing third with three home runs and 21 total bases. On July 24th, the Texas native went 3-for-4 with a go-ahead homer in the ninth inning off Houston closer Francisco Cordero en-route to a 4-2 victory at Minute Maid Park. The following night, Stubbs paced the Reds offense, going 2-for-5 with two doubles, two runs scored and three RBI as the Reds capped a four-game sweep at Houston with a 5-3 victory. The right-handed-hitting slugger notched his 12th homer of the season in Sunday’s 7-2 win over the Rockies while collecting his team-leading 21st stolen base as the Reds completed a three-game sweep at Colorado. This is Drew’s first career weekly award.

Does that make it easier or harder to trade him by the deadline tomorrow? On the one hand, he’s increased his trade value a bit by showing how good he can be, but on the other hand, in showing the Reds how good he can be, maybe he doesn’t need replacing after all.

None of the options that the Reds have been linked to–Juan Pierre, Denard Span, or Shane Victorino–strike me as so much better than Stubbs that the Reds should obtain them no matter the cost. With Joey Votto about to return, I might not be too upset at Walt Jocketty for doing nothing again.

Last Game
The Reds won their tenth in a row last night over the Colorado Rockies. They are tied with the Nationals for the best record in baseball, and they are in a 3-game lead in the NLC.

Meanwhile, the Pirates have gone 7-3 in their last 10, which is a pretty darn good run. What an incredible situation where the second-place team can win 70% of its games and lose a game in the standings.

Next Game
Having just swept the Astros and Rockies on the road, tonight the Reds head back home to try their hand against the Padres. The Reds lost 3 in a 4-game series while visiting the Padres just before the All-Star Break, but that was in California and before the win streak fairy had bitten the Reds so thoroughly.

Farewell to the Poofy-Haired Fancy Boy 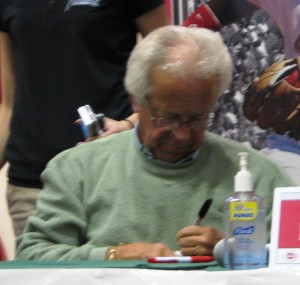 I was once told that Marty had “digits from every nursing home in the county.” I wonder how the ladies will like him as a cue ball.

A few weeks’ back, in the course of the regular guy talk about the team, Reds’ Hall of Fame broadcaster Marty Brennaman said that, if the Reds won 10 in a row, he’d shave his trademark hair. Well, lo and behold, here we are with a Last 10 of 10-0 and the just-turned-70-year-old says he’s going to go through with it.

At first, they were saying Homer Bailey would be manning the clippers, but he’s no Ramón Ortiz, so I guess they’ll get a proper barber involved now. He’s supposed to shoot a commercial on Monday, so he’s going to keep the iconic coif until later in the week.

And when the hair does come off (purportedly in the clubhouse on Friday), I’m sure it’ll be all over the t.v. coverage. Already this news has completely stopped the discussion of Jim Bowden saying the Reds are “definitely” trading for Shane Victorino (Braves), Denard Span (Twins), or Juan Pierre (Braves).

Those guys do fit the profile of who the Reds might be looking for in a lead-off hitter, but it’s hard to look at the Reds right now, even having been without Joey Votto, and say this is a team that needs much. Plus, Bowden is not exactly known for his wisdom, or even honesty.

Posted in Daily Briefs.
Comments Off on Brennaman to shave head for Reds’ 10-game W streak

After having just one home run in the last five games, the Cincinnati Reds had five home runs in one game to defeat the Colorado Rockies 9-7.

Johnny Cueto started for the Reds and was uncharacteristically bad, allowing 3 runs in the first inning. And he was lucky. The first four batters reached base via 3 straight singles and a double. After that, Cueto struggled, but managed to battle through and give the Reds time to come back. Cueto’s final line was 6 innings, 10 hits, 5 runs, 2 walks, and 3 strikeouts. Thanks to the offense, he even got his 13th win.

In the top of the second, Ryan Ludwick and Todd Frazier both hit solo home runs to bring the Reds within 1. In the very next inning, Drew Stubbs tied it at 3 with his own solo shot. The 5th was when the Reds took the lead, never to give it up again, thanks to a 4-run outburst, this time without the help of homers. Zack Cozart and Drew Stubbs singled in a run apiece, and Brandon Phillips drove in 2 with a double.

The bullpen was a little shaky last night, with Jose Arredondo allowing a couple to score in the 7th, but Scott Rolen added his own solo home run in the 6th, and Ludwick hit his second solo shot in the 8th.

Aroldis Chapman finished the 9th for the save and the Reds won the series while extending their winning streak to 9. The Pittsburgh Pirates won, so they remain 2 games behind Cincinnati. The Reds are 20 games over .500 for the first time since the end of the 2010 season.

The Reds go for the sweep against the Rockies this afternoon. Mat Latos will face Jonathan Sanchez at 3:10pm EDT.