Cards are Going Down

I'm going to miss the game tonight, at least the beginning, but after that down-in-the-dumps entry I just posted, I thought I'd better put up a little bravada for anyone who comes here looking for some smack.

You Cards fans better watch out. Rich Aurilia is at second base tonight, and that can only mean trouble. 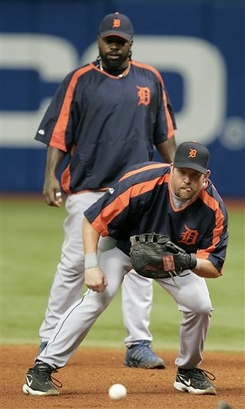 The Reds sucked hard on Monday as they opened a four-game series with a 13-1 loss at the hands of the Cardinals.

Elizardo Ramirez, who usually gets the hard-luck loss, was well-deserving of the loss this time around. He allowed seven runs (six earned) on six hits and two walks in one and two-thirds innings.

The Reds' one run came on a solo shot by Javier Valentín. Valentín went 2-for-4 and Royce Clayton went 2-for-4. Ryan Freel, Ken Griffey, Jr., Edwin Encarnación, and Scott Hatteberg had a hit apiece. Freel and Hatteberg also walked. And that's all there was, offense-wise.

The loss brings the Reds' record to 57-55. They're not four and a half games back on the Cards and share the wild card with the Dodgers. They try to pull their heads out of their asses tonight as Eric Milton takes on Jason Marquis.