After several consecutive poor performances, the Reds have optioned Elizardo Ramirez back to AAA Louisville and recalled reliever Brian Shackelford.

It's a shame: the Lizard was SO good for a while there. But he's just a 23. He's still got time to rediscover his awesomeness.

Kyle Lohse performed well his last outing and is pencilled in to start on Thursday. But if he's our fifth starter, who's going to be our fourth starter? Chris Michalak, Ryan Franklin, and Matt Belisle seem like reasonable possibilities.

Thank You, Pirates and Other Stuff

It's official, the Pittsburgh Pirates have done what the Reds could not last week: swept the St. Louis Cardinals. And with the Reds taking two of three from the Phillies, we're again in a position to see a battle for first place. The Reds sweep the series next week and we've got first place all to ourselves.

As Brian Baute, a guy I've never conversed with before and who has has not returned my follow-up message, pointed out on his blog, there are those who think that the Cardinals cannot be challenged for first place in the NLC. Mr. Baute himself agreed, just not with the reasoning that led SportsCenter's Jeff Brantley to that conclusion. They quibble over whether the Reds are good enough, all the while overlooking the fact that the Cardinals simply are not what they once were.

So, I just wanted to send a quick thanks to the Pirates for doing their part to bring the Cards down a peg or two. Here's hoping we can finish the job.

UPDATE 9:20 p.m. I have gotten a lovely e-mail from Mr. Baute, and he seems like a heck of a guy. I really shouldn't have called him out to begin with. I was just venting my frustrations that Redleg Nation managed to reference his post before I did, but that's not an appropriate outlet for my irritation, and I know that. I hope that, with time, you all can come to forgive me and that we can move past this, stronger for the experience.

Rich Aurilia
I'm psyched about Rich Aurilia. He had so many detractors last season, but people really seem to have come around this year. What has he done that's so different this year? Not having his comments to the media misconstrued by hotheads is the only thing I see. Smart move on his part.

Ten with Ten
Last season, in an effort to find something positive to talk about, the Cincinnati media made a bit of a deal out of the fact that the Reds were on pace to have ten different players with at least ten home runs. Sean Casey was the last piece of the puzzle with nine.

About that time Edwin Encarnación started coming on, and I said that Eddie was more likely to reach 10 than Casey. In fact, neither of them did. Casey had a concussion that took him out for the season and Encarnación just ran out of time and they both ended the season with nine.

This season, the Reds are close again. Eight players have had ten home runs for the team so far:

That's pretty close, but since the next highest on the list is Ryan Freel with 7 (really 8, stupid umps in Chicago), I'm not sure how likely the Reds are to make this milestone this year.

Conspicuously missing from the list: Jason LaRue and Javier Valentín, each with 5. Of course, they've both suffered a serious cut in playing time with David Ross in the picture. Our three catchers have combined to provide 24 homers this year.

Those guys will have to turn it on to make it to ten players with ten homers unless Bronson Arroyo's planning to smack eight more before the season is done.

Comeback Player of the Year
Ken Griffey, Jr. won the Comeback Player of the Year Award last year, but I think the Reds have an even stronger nominee this year in Eric Milton. Last year his suckitude was the thing of legend, and this year he's been downright nondescript. The climb he had to make to achieve mediocrity deserves some sort of recognition. 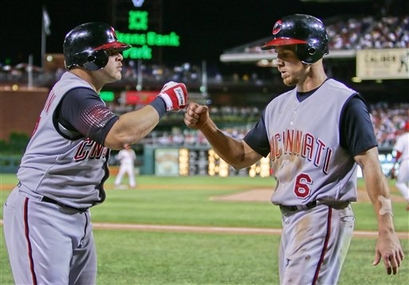