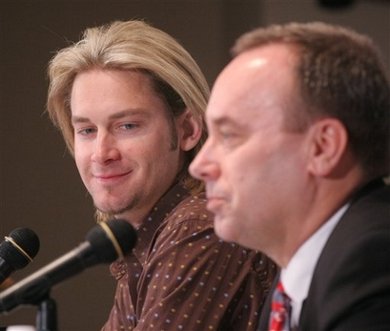 In addition to giving Bronson Arroyo a two-year contract extension last week, the team is also in negotiations to allow the pitcher to wear hair extensions. “We'd also like to get Cornroyo some nice new highlights,” said Reds' general manager Wayne Krisky. Talks for a perm died at the table.

Major League Baseball is now mandating that all of the teams keep their balls in similar conditions, according to ESPN.com (via):

The commissioner's office is telling teams for the first time that balls must be stored at a uniform temperature after they are delivered from the manufacturer.

This move is obviously in direct response to the Rockies' practice of storing their balls in a humidor, which appears to have drastically reduced the number of home run balls given up by their ballpark. The humidor controls the humidity of the ball storage conditions.

At the same time, the move is distinctly characteristic of the MLB in that it doesn't actually address the humidity of the storage conditions:

“We have contacted all 30 of the clubs, and they have all confirmed to us that they will all be storing their baseballs in a temperature-controlled facility. We're not going to have humidors everyplace, but every place will be temperature controlled, and so I think there will be a very high degree of uniformity.”

So if we accept that the storage temperature will have any impact at all, the question becomes how will this affect the Reds? I can envision several possibilities: