Four Narrons In A Duffle Bag 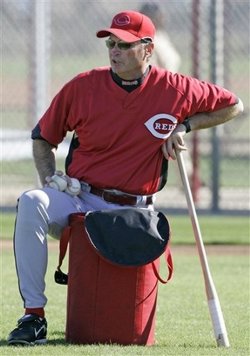 “Dammit, it stinks in there!”

Pirates to Get New Scoreboards

Lest you think there won't be anything new and exciting to watch at PNC Park this season, the Pirates have announced that they are improving their big-screen scoreboard and adding an LED to span the upper deck:

The new main scoreboard display will have the capability of more than doubling the size of the current video display, as well as splitting into multiple windows to show lineups, statistics, out-of-town game information, animation, video clips and much more.

Finally you'll be able to watch the Pirates' fail to score runs at twice the size!

In much more site-appropriate news, there's another plan on the table for the Reds' spring training facility:

A consultant's plan quietly being shopped around by Sarasota Agricultural Fair Association leaders shows a new spring training baseball stadium, clubhouse, offices and practice facilities for the Cincinnati Reds at the fairgrounds on Fruitville Road -- along with a hotel, modern arena and conference center.

So long as the on-site hotel is for tourists and not pre-practice Craig's List interludes, it could be a good plan.

It’s not the size of the worm…

…it's how you dangle the bait. And Ryan Freel is apparently pretty good. 🙂

I grew up fishing almost every day, though I haven't done it in years. So I got a kick out of these photos from the Enquirer. Ryan Freel went fishing after practice, and apparently took Bubba Crosby with him:

Where was he fishing, I wonder? In the Ohio River? Are the fish safe to eat?

In other news, the Reds are considering going with only 11 pitchers - so they can carry Josh Hamilton. Which would be good news for Bubba, I guess. Especially if going with less than three catchers is out of the question…

Posted in Red Hot Diaries.
Comments Off on It’s not the size of the worm…

If Shack’s Not On Match.com, Farney’s on Craig’s List

The Big Lead seems to think that Ryan Freel (or rather, Farney) is responsible for this ad on Craigslist (Via Deadspin):

I am here for two months before i head back up north. I have this morning before practiceâ€¦..looking for a woman to enjoy the morning with. Can be married or single, disease free is important. I am 5â€²9â€³ 180 short hair and blue eyes, in shape, of course.

It's probably not Freel, of course, but it's easy to imagine the Reds' clubhouse getting a little TOO wired, if you know what I mean.