Behind Every Good Man 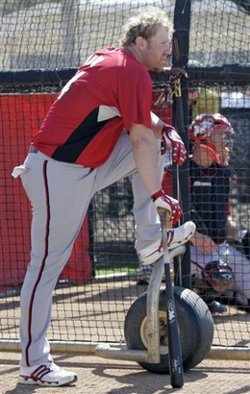 Adam Dunn reported to spring training camp a little early and a little lighter this year. While people will debate whether Dunn really needed to trim down, there aren't too many people out there saying it's going to be a bad thing.

Especially, I bet, his doctor. Looking at this photo, you can tell he's looking good, but even so, Dunner is hardly dodging raindrops. His cholesterol had to be approaching the Crestor phase by the end of last season.

So what's changed? Did he get tired of getting short of breath from tying his shoes? Probably not: that wasn't enough to get his booty in gear last season. Did he get sick of people being down on him all the time? Doubtful: what does the Big Donkey care what people think? Did the bruises from Griffey constantly poking him in the belly to laugh like the Pillsbury doughboy start to bother him? Of course not: that's a good thing!

But there is one thing that comes immediately to mind when I think of things that are different in Mr. Dunn's life since last year: fatherhood. Maybe the desire to stay fit and healthy long enough to see his son grow up has had an impact or perhaps a lady-friend has had a positive impact. Maybe something else. Whatever it is, I think I'd be more interested to hear about it than hear Josh Hamilton's story again or listen to Yankee fans complain about Bubba Crosby.

One things for sure: if there is a good woman back there, she's going to have a tough time staying hidden behind him if he keeps losing weight.

But When Do We Get the Ghost of Kirby Puckett?

I didn't even realize that the Twins were looking to replace the Metrodome, but now that I see that they're having problems getting the land deal done, I see what a potentially large impact this could have on the Reds. I mean, if they don't build themselves a new ballpark, how are we ever going to get their old one?

Among my e-mail was a message from a Reds staffer with this beautiful sentence:

Got down here in Sarasota a couple days ago. Everyone looks great. Griffey is in very good shape. Just worked with Bubba - nice guy. Told Javy he's the Latin Love Machine on the web - he was quite embarrassed.

And to think just a year and a half later, our favorite little catcher would discover what we so affectionately call him.

I wonder though: if he was embarrassed by being called “the Latin Love Machine,” how would he respond to seeing the bouncing Javy head?